A worker sprays insecticide at a residential area in Singapore. On August 27, the global travel hub announced its first case of Zika virus, with the city state reporting its first pregnant woman with Zika on August 31, 2016. Local officials suggested a potential cluster of pregnant women with Zika.

A virulent version of the Zika virus that has swept the globe is headed for India, where an older, more benign strain is likely to be quietly residing within some Indians, possibly preparing genetic ground for a quick, new second-coming, experts have warned.

In India, the Zika virus--which has no cure or vaccine--was first found in Pune 64 years ago, as part of a survey that was testing immunity to Japanese and Russian varieties of a virus-borne brain infection called encephalitis, according to a forthcoming paper authored by World Health Organization (WHO) scientists.

The paper comes soon after this study in the Lancet, a medical journal, which used travel patterns to predict that India--where more than 67,000 air travellers arrive every year--and four other countries (China, Philippines, Indonesia and Thailand) were most at risk for year-round transmission of the Zika virus. China has more people, but more people are at risk in India.

A virus that hasn’t been particularly dangerous since it was first discovered in a rhesus monkey in Uganda's Zika forest in 1947 (the first human case was reported in Nigeria seven years later), Zika has grabbed global attention because the virulent form—more than a million infections have been reported from Brazil--is linked to microcephaly, abnormally small heads and brains in foetuses.

After first emerging on a remote Pacific island in 2007, the new strain, borne by the female Aedes mosquitoes and air travel, and detected in Brazil in May 2015, has swept through 26 countries in the Americas, Cape Verde in Africa and Singapore, where 200 infections were reported within eight days. Currently, 58 countries and territories are affected by the Zika virus, according to the Centers for Disease Control and Prevention (CDC), the American national health agency.

On September 5, 2016, the Philippines confirmed its first Zika infection.

“The original African strain went to Asia between 1954 and 2000, that did not cause microcephaly,"Peter Hotez, the dean of the National School of Tropical Medicine, at Baylor College of Medicine in Houston, USA, told IndiaSpend via email, explaining Zika’s march.

"The shift to the pandemic strain happened in 2007 to Micronesia and in 2013 to French Polynesia. This is sometimes called the Asian strain, which went Eastward into the New World. Now the Asian ‎strain is headed to Africa continuing East back to India.”

Despite email requests over a week, the National Centre for Disease Control, the National Institute of Virology (NIV), and the Integrated Disease Surveillance Program (IDSP) did not respond to requests for comment on the possible entry of Zika into India.

As we shall see later, India does not know if the strain detected in Pune in 1952 has spread and if it has made Indians more susceptible.

The mutations that have made Zika dangerous

Zika could complete its trip around the planet by spreading to vulnerable areas of the ‘Old World’--Europe, the Middle East, and Africa--Hotez said in a commentary Will Zika return to the ‘Old World’?, published in May, 2016, in Microbes and Infection, a scientific journal.

Along the way, Zika changed its character, from a relatively benign virus causing fever, malaise, skin rash, conjunctivitis (red eye), muscle and joint pain and headache, according to this review paper published in the International Journal of Infectious Diseases, to one that causes neurological disorders such as microcephaly and the Guillain Barré syndrome (GBS), a temporary paralysis that can sometimes result in choking and death.

“Zika appears to have undergone significant number of mutations, possibly in its NS1 gene, to make it more neurotropic (affecting nervous system) and better adapted to grow in humans and mosquitoes. It has become a pandemic strain,” said Hotez.

The NS1 gene helps the Zika virus--from a family called flaviruses, the largest about 120 times smaller than a human red-blood cell--replicate and evade a response from the human immune system.

The scary part about the new Zika strain, Prof Hotez said, is its ability to infect pregnant women and the unborn foetus to cause microcephaly, which leaves infants with not just distorted features but stops the growth of the brain.

How Zika marched across the world

After Zika was detected in humans in 1954 in Nigeria, serologic evidence--evidence from blood serum--of human infection was reported from at least seven African countries and parts of Asia, including India, Malaysia, the Philippines, Thailand, Vietnam, and Indonesia, between 1951 and 1981.

Between 2007 and 2014, it caused, as Prof Hotez put it, "explosive” outbreaks in Micronesia, French Polynesia, and Easter Island-South Pacific.

Then, in May 2015, a Brazilian national laboratory reported a native--or local--case of transmission.

“A new mosquito-borne disease had indeed arrived in the Americas, though no one knew what that might mean,” said this WHO May 2016 report: One year into the Zika outbreak: How an obscure disease became a global health emergency.

By mid-July, 2015, Brazil notified WHO of a spike in neurological disorders--swelling of brain and spinal cord, GBS and microcephaly.

Since its entry into Brazil, according to the review paper, Zika cut a swath through 26 countries in the Americas. 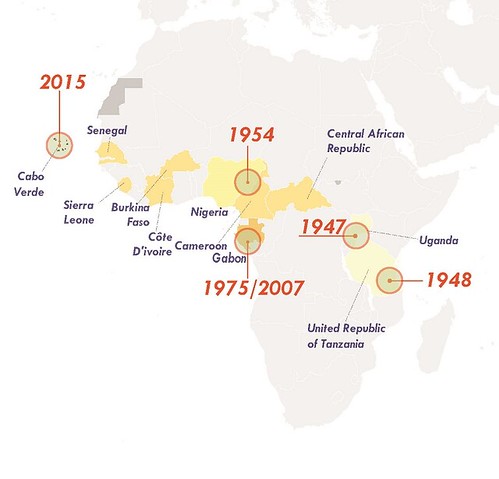 In February, 2016, China reported its first cases (probably imported from the Americas); in March, Bangladesh confirmed its first case; in late July, mainland US declared its first locally-acquired case, although its first travel-related case was in 2007.

On August 27, Singapore--a global travel hub--announced its first, with the city state reporting its first pregnant woman with Zika, on August 31, 2016. Local officials suggested a potential cluster of pregnant women with Zika. By September 8, 2016, within 13 days of the outbreak, 292 cases were reported, and genetic sequencing revealed that the viral strain was not a Brazilian import but came from within Asia.

In most of the 69 years that Zika has swept through the world, from Africa to Asia to the Americas, it was regarded as benign, with no deaths and hospitalisations reported.

Since the older strain led to few ill effects, people travelled and spread the virus, which also jumped continents with its primary carrier, the Aedes aegypti mosquito species, but also through another called Aedes albopictus. Wherever the mosquito--which itself emerged from forests and adapted to human habitation--has gone, the virus has followed.

“The mosquitoes do not travel very far, but infected people do,” Thomas Yuill, emeritus professor at the University of Wisconsin-Madison, USA, and viral diseases moderator at ProMed, a global reporting system for infectious-disease outbreaks, told IndiaSpend.

“The appearance of Zika virus in Micronesia, French Polynesia and Easter Island was surprising because these were the first outbreaks outside of the virus' usual area of Africa and Asia. These outbreaks, followed by the one in Brazil, illustrate how the virus can be moved over long distances and initiate epidemics in new places,” said Yuill.

How Zika spreads: Through the female mosquito's blood meal

The primary transmission route of Zika, according to this 2016 review paper, is the bite of the female Aedes mosquito when it has a human blood meal. Other modes of transmission include sexual intercourse, blood transfusions, and perinatal transmission from mother to foetus during gestation or at the time of delivery.

Transmission begins from humans. When the mosquito has its meal of blood, the virus infects the insect, spreading to its salivary glands, from where it passes into the blood of the next human bitten.

Then there is vertical transmission---the virus can be passed on from the Aedes aegypti mosquito to its offspring--according to a study published in The American Journal of Tropical Medicine and Hygiene, a scientific journal.

The virus incubation period is between three and 12 days after the mosquito's blood meal, after which--in most cases--there are no discernible effects for a week.

In one in five cases, the symptoms overlap with diseases caused by other Zika-like viruses, such as dengue and chikungunya, both of which are currently killing and disabling patients in Indian cities and villages.

The common symptoms, which last for two days to a week, include fever, malaise, skin rash, conjunctivitis (red eye), muscle and joint pain, and headache.

Why India is at risk

India contains Zika's "disease ecology"—Aedes aegypti and Aedes albopictus mosquitoes, crowding, poverty, lack of sanitation and hygiene, travellers and visitors and warming that prolongs mosquito season. It will only take an infected person to travel to India and then be bitten by the tiger mosquito.

Aedes aegypti is now found mainly in homes and other buildings, protected from monsoon winds and other factors that slowed its spread when it was a forest-dwelling creature. It is active during the day, and it is a master of evolution.

Between 5% and 20% of a mosquito population's collective genome--the collection of their genes--is responding to evolutionary pressure at any given time, according to this June 2015 study published in the Proceedings of the Royal Society B, a scientific journal. Aedes aegypti and dengue are prevalent wherever there has been a Zika outbreak in the Western hemisphere. Indonesia and India are currently experiencing the worst dengue problems in the world, said Hotez.

“Based on that assumption, India is at risk,” he said. In India’s case, though, there are some big unknowns.

First, how widespread was the earlier African strain reported in India during the 1950s, and how exposed was India’s population to that first wave?

“That earlier strain does not cause microcephaly but could possibly induce immunity to this new more concerning virus strain,” said Hotez. India needs more studies to find out.

Second, could the new pandemic Zika strain affect India, as it is currently Singapore?

“We have seen that wherever dengue occurs in Western Hemisphere, we can find Zika as well," said Hotez. "But we don't know if that's just because both viruses are transmitted by Aedes aegypti, or if previous dengue infections can also promote increased susceptibility to Zika.”

Since the symptoms of dengue, chikungunya and Zika virus infections are similar, and only laboratory tests can distinguish one from the other, it is possible that cases clinically diagnosed as dengue or chikungunya fevers could be Zika infections.

“This may be the case in India, but until prospective surveillance with good laboratory support is in place, nobody knows,” said Yuill.

The question, as Yuill put it, is this: Has Zika not been present in India or has no one looked over the past 40 years?

Chinkungunya wasn't supposed to be in India; then it showed up

Zika's cousin, chikungunya, first had a major outbreak across India--barring Kerala which had no Aedes aegypti mosquitoes then--between 1964 and 1967.

Chikungunya faded from public and scientific memory, and when it returned in 2002, "we were caught with our collective pants down", said T Jacob John, a retired virologist who, along with two colleagues, documented India's first HIV infection in 1986, and designed a national response.

The second coming of chikungunya in India came through a mutated and more virulent virus, John noted. "We missed a golden opportunity to document all that."

John said the ministry of health is not designed to anticipate virus outbreaks and conduct precautionary investigations. The second entry of chikungunya was documented by the National Institute of Virology but not by the ministry.

To brace for the eventuality, Hotez said, India needs to start seroprevalence studies, which will determine how widespread past Zika infections were in India over previous decades and whether or not India remains susceptible to the new avataar of Zika.

Biological events are unpredictable, but government responses should not be.

However, said John, “civilized countries would err on the precautionary side rather than relying on luck as we Indians often do”.

(Varma is a freelance journalist based in Andhra Pradesh. He writes on science, with a special interest in climate science, environment and ecology.)