Why Women, Children In Rajasthan’s Tribal Belts Are Facing Hunger

Dungarpur: Hunger and malnutrition are likely to become more acute among young children and pregnant and lactating women in Rajasthan’s tribal belt as community health workers, who deliver public nutrition schemes, struggle with the food shortages caused by the ongoing lockdown, our field report shows.

The delivery of food and ration kits for vulnerable social groups has also been impacted by the extra load of COVID-19 duties assigned to the community workers and the patchy flow of information between various stakeholders, we found. 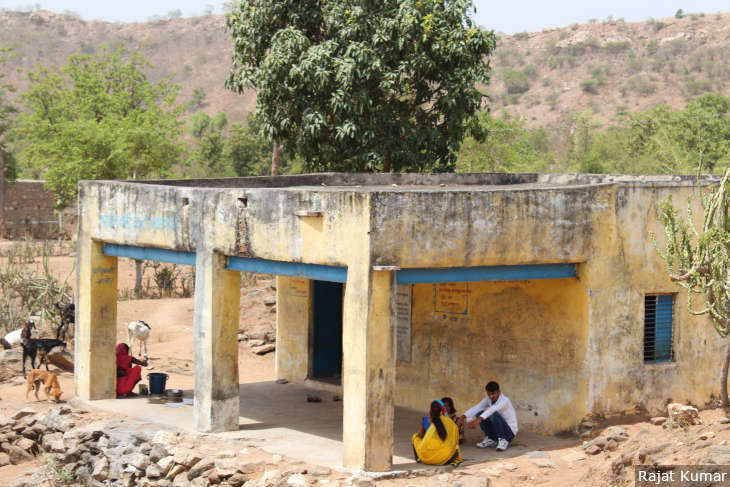 Anganwadi centres like this one in Dovra block of Rajasthan’s Dungarpur play a critical role in providing nutritious food to vulnerable social groups.

Currently, all the beneficiaries are only being given dry ration in the form of wheat and chana dal (split chickpeas). Even this is being delivered late or in smaller quantities, we found in our interactions with pregnant and lactating women, parents of children enrolled at anganwadi centres, grassroots workers and civil society organisations in Dungarpur and Udaipur.

The performance of the nutrition schemes is critical in these two districts because they have a large tribal population--70.8% in Dungarpur and 49.7% in Udaipur--and report among the highest prevalence of stunting, anaemia, wasting and severe wasting among children below five years in the state.

The data we collected from 40 anganwadi centres in Dungarpur showed that dry ration was distributed at only nine centres in April 2020.

“For May [2020], I needed around 2 quintals of wheat for distribution to women and children but got only half of it from school,” said Lata Devi*, an anganwadi worker (AWW) from Dovra block of Dungarpur. In many villages, people did not get any supplies from anganwadi centres and those who did got too little, said Bhaneswar Parmaar, a social worker from Dovra.

“I have not received any poshahaar for my daughter since the lockdown,” said Bhawna Yadav, the mother of a one-year-old girl and a beneficiary enrolled with the anganwadi at Dovra block.

The continued interruption of food distribution under the Integrated Child Development Services (ICDS), a flagship programme of the central government, could have a long-term impact on children, said Indira Pancholi, a senior health activist in Rajasthan. “I understand that this is a challenging situation and all decisions have been taken in a hurry, but we should come up with a solution soon,” she said.

IndiaSpend made nine phone calls over two days to the deputy director of ICDS for Dungarpur district, for a response on the current challenges of food distribution. The calls went unanswered. We will update the story when we receive a reply.

Around 47% and 41% of total ration card holders in the rural areas of Dungarpur and Udaipur respectively are below the poverty line, which includes those entitled to the central Antyodaya as well as state Annapurna programmes under the Department of Food and Civil Supplies. They depend on the public distribution system (PDS) for foodgrains.

The table below shows the nutrition status of children and women in rural Dungarpur and Udaipur. The situation is particularly grim in the tribal pockets. 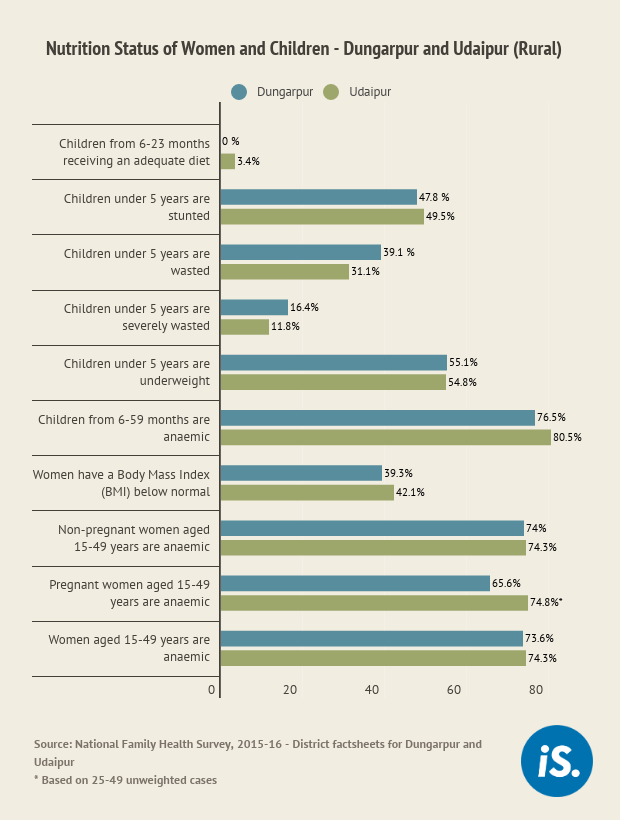 The loss of livelihoods and reverse migration caused by the pandemic are already straining the state’s PDS and food security, at a time when “food insecurity, malnutrition and poverty may escalate, particularly among marginalised people in the developing world due to the rapid spread of coronavirus”, as per an April 2020 report by the International Food Policy Research Institute.

Here is an example of how the pandemic has affected traditional livelihood practices in the area and its food security. “People from southern Rajasthan go to Gujarat in January-March to harvest wheat and are paid with grains which they stock for a year,” said Madhulika, a Dungarpur-based social activist, who goes by one name. “But the lockdown kept them home this year and those who managed to go, came back without wheat. So, there will be more demand for the PDS.”

In the early days of the pandemic, and even before the lockdown was announced, Rajasthan had started putting various welfare measures in place. Though anganwadi centres were declared closed when COVID-19 spread in the first half of March 2020, the state mandated that there was to be no disruption in the distribution of take-home rations. 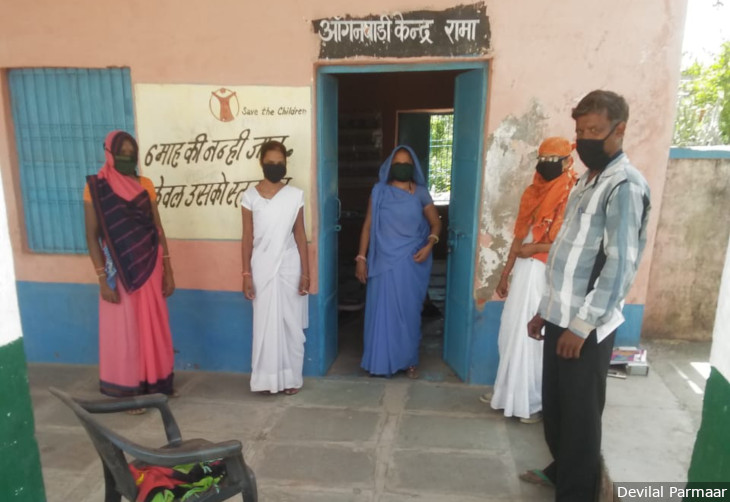 Though the announcement of the measures was timely, their implementation, especially in Dungarpur and Udaipur districts, remained problematic. The reasons, we found, were as follows.

‘No vegetable in days’

“We have not eaten vegetables in days to save money for emergencies,” said Janki Nai, a resident of Sarada block of Udaipur. While many anganwadi workers said that they had distributed the ration packets to beneficiaries in April and May 2020, the beneficiaries denied this or maintained that the quantity was smaller than mandated.

“In April, I provided 2 kg of wheat for children and 3 kg for pregnant and lactating women but since I didn’t have the money to buy 1 kg chana dal for each beneficiary, I only distributed 100 gm,” said Rekha Kumari*, an anganwadi worker from Dungarpur, “In May, I got wheat from the government school, but did not get dal from the PDS shop.” The Child Development Project Officer (CDPO) in Dungarpur, when asked about inadequate ration distribution, clarified that this happened because many workers did not have enough funds in April 2020.

The indicators for a nutritious diet are widely agreed to be Minimum Dietary Diversity and Minimum Meal Frequency. Dietary diversity requires a child to consume more than four of the following food groups--grains, roots and tubers; legumes and nuts; dairy products; flesh foods; eggs; Vitamin-A rich fruits and vegetables; and other fruits and vegetables. The minimum meal frequency is twice for breastfed infants (6-8 months), thrice for breastfed children (9-23 months) and four times for older children.

The wheat and chana dal being provided currently do not measure up to the requirements of dietary diversity.

“For the first few days, we didn’t know what we were supposed to do because suddenly, our role had changed from ASHA [accredited social health activist] workers to COVID-response surveyors,” said Bimla Devi*, an ASHA worker from Kotra block of Udaipur. “We were not told how to deal with our new roles and were afraid of being infected by a disease about which we knew so little.”

On March 17, 2020, a government order added pandemic duties to the food distribution tasks assigned to anganwadi and ASHA workers (community health workers). This meant they now had to conduct door-to-door surveys of incoming migrants, create awareness about the pandemic, buy rations, package and distribute them, and share online material for pre-school learning.

“I am involved in creating awareness about the use of masks, social distancing, and washing hands to avoid the spread of corona,” said Lata Devi*, the anganwadi worker from Dovra block who is responsible for 50 families and has to walk 8-10 km to cover these. “I am also doing surveys of people in my area who are coming back from cities after lockdown. Now we have to make ration packets and deliver them to families.”

Further, many community health workers have not received masks, soaps and sanitisers. In some anganwadis, civil society organisations have been providing the masks. “We are creating awareness about wearing masks and cleanliness, but we didn’t get any masks and soaps,” said Jasoda Parmaar of Jhontri block in Dungarpur and the president of the Rajasthan Anganwadi Karyakarta and Sahayika Union. “A few NGOs are distributing them or we buy them with our own money.”

The increased workload and lack of safety gear is causing stress among community health workers who are at high risk of contracting COVID-19. Villages in southern Rajasthan are dealing with a high number of cases as migrants, mostly from badly hit states such as Gujarat and Maharashtra, return to their villages.

Dissemination of information about the distribution of nutrition kits between officials and workers and between workers and beneficiaries has been poor during the lockdown, we found.

There are three key frontline workers at anganwadi centres--anganwadi workers, their helpers and ASHAs. The anganwadi worker is responsible for providing THR and ensuring check-ups and referrals for malnourished children. The helper handles the cooking, and ASHA worker mobilises women and children for immunisation. There are generally 10 to 15 anganwadi centres per sector with one lady supervisor. Further, there is an auxiliary nurse midwife at the health sub-centre responsible for immunisation in the area who visits a centre for a day each month for immunisation.

Dissemination of orders and circulars to the workers is through WhatsApp messages or phone calls. Those with smart phones receive the information immediately and the rest get it late or never: Nine of the 16 community health workers we spoke to said they are not being informed or informed late about duties and deliverables during the lockdown. These workers are either from interior villages or do not have smartphones.

“At my centre, immunisation happens on the second Thursday of every month but this hasn’t happened since the start of the lockdown,” said Geeta Kumari*, an ASHA worker from Dovra block. “I have no information from the ANM and now I will have to call her to find out.”

The situation is worse in the interior blocks. In Lasadiya, Kotra and Jhadol blocks of Udaipur, many workers are new and still being trained and know nothing about the orders.

Further, in many centres, beneficiaries have been asked to collect their kits from the centre, instead of waiting for it to be home-delivered as is the norm. “This happened in many villages in April when only beneficiaries who got the information that ration packets had to be collected landed up at the anganwadi centres,” said an ASHA worker in Dungarpur.

There was a poor flow of instructions between the Department of Women and Child Development and the food supplies department, we found. In an April 27, 2020 order, anganwadi workers were asked to get wheat from government schools and chana dal from PDS shops. But PDS dealers were not aware about this order and said they were yet to receive the chana dal stocks to be distributed, anganwadi worker Jaya Devi* said.

One of the Dungarpur CDPOs clarified that the chana dal has reached the district headquarters but has yet to be delivered to the PDS dealers. “We will distribute chana dal for the months of May and June [2020] together,” she said.

Special measures are needed during the pandemic to strengthen the schemes that cater to the health of women and children, health activists said. Here are some of their suggestions: