Why India Is Likely To Miss Its Nutrition Targets For 2022

New Delhi: At its current rate of progress, the National Nutrition Mission (NNM) cannot meet its 2022 targets to reduce malnutrition in India, a new study has reported. This is despite the reduction in malnutrition India achieved in the 27 years upto 2017.

But if the NMM continues to progress at the current pace, relative to the 2022 targets, there will be an 8.9% excess prevalence in low birthweight, 9.6% in stunting, 4.8% in underweight, 11.7% in anemia among children, and 13.8% in anaemia among women, said the paper published on September 17, 2019, in The Lancet Child and Adolescent Health.

Malnutrition was the predominant risk factor for death in children under five years of age in every Indian state in 2017, accounting for 68.2% of the total deaths in that age group, the researchers concluded.

Malnutrition was also the leading risk factor for health loss across all ages, responsible for 17.3% of the total disability-adjusted life years (DALYs) that denotes the years of potential life lost because of disability.

India is not on track to achieve its 2025 nutrition target--to achieve zero hunger--IndiaSpend had reported in December 2018.

The researchers working on the Lancet paper analysed the disease burden due to child and maternal malnutrition, and the trends in malnutrition indicators from 1990 to 2017 in every Indian state. This study was part of India State-Level Disease Burden Initiative Malnutrition jointly conducted by the Indian Council of Medical Research, Public Health Foundation of India, and Institute for Health Metrics and Evaluation in collaboration with the Ministry of Health and Family Welfare, along with experts from over 100 Indian institutions.

Also, there were signs of a new nutrition problem--one in every 10 children was overweight (11.5%).

The study highlighted the biggest factors that lead to higher malnutrition in children--low birth weight and poor exclusive breastfeeding. One in five children (21.4%) was born with low birth weight or under 2.5 kg, and only half of all children were exclusively breastfed (53.3%).

There is a need to set bold but achievable targets based on the analysis of these data, said the paper.

“This study reports that malnutrition has reduced in India, but continues to be the predominant underlying risk factor for child deaths, underscoring its importance in addressing child mortality,” said Lalit Dandona, director of the India State-Level Disease Burden Initiative, in a statement. Low birthweight needs particular policy attention in India as it is the biggest contributor to child death among all malnutrition indications and its rate of decline is among the lowest, he added.

The states were divided in terms of the socio-demographic index (SDI)--low, middle and high--calculated on the basis of per capita income, education, and fertility rate in women younger than 25 years.

The malnutrition DALY rate was much higher in low SDI states than in the other groups. It varied from six to eight times across states in 2017, and was highest in Uttar Pradesh, Bihar, Assam, and Rajasthan, as per the study.

The malnutrition rate in low SDI states was 1.8 times higher compared to the middle SDI group and 2-4 times higher than the high SDI group.

The DALYs rate due to malnutrition across all ages varied six times across states. In low SDI states, it was double the rate reported by middle SDI states and two to seven times higher than in high SDI states.

Disability-adjusted life-years rate due to malnutrition in children under five, 2017 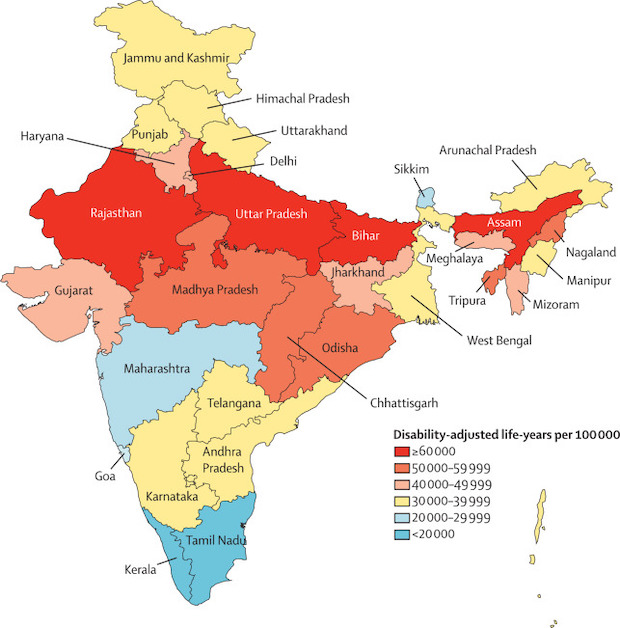 On almost all indicators, the rate of decline when projected for 2022 was not enough to meet the NNM targets.

Stunting prevalence reduced significantly in every state of India during 2010-17 but this decrease was less than the 8.6% annualised reduction needed to reach the NNM 2022 target. Similarly for wasting, underweight and anaemia, at the current rate of progress, the NNM targets are not likely to be met.

As we said earlier, there would be excess prevalence for low birthweight, stunting, underweight and anaemia in children relative to the 2022 targets.

The malnutrition indicator targets set by NNM for 2022 are “aspirational” and the rate of improvement needed to achieve them is much higher than the rate observed and might be “difficult” to reach in a short time, the study said. “This slow pace of improvement needs to be accelerated, so that future prevalence of malnutrition indicators are better than our projections based on trends so far,” the study said.

Correcting or resetting of targets has been done before at the global level. In 2005, the World Health Organization set its Global Nutrition Targets for six indicators to be achieved by 2025. But it became clear in a 2018 review that these targets were too high and “if the targets are too aspirational, they might be labelled as unrealistic, with the potential that investment and action are demotivated”. So the targets were re-set for 2030.

The paper suggested that NNM could set “bold but potentially achievable targets” for 2030. There could be national and subnational targets for reducing malnutrition based on the analysis of trends, the paper suggested.

Low birthweight and short gestation or premature birth or was the largest contributor to the malnutrition disease burden, the paper found, responsible for 43.6% of DALYs.

South Asia, with India as its largest component, is estimated to have the highest prevalence of low birthweight in any region. It impacts not just the child but increases risk of chronic diseases later in life.

Low birthweight prevalence decreased significantly in 14 states of India during 2010-17, but its decline--1.14% annually--was much lower than the 11.8% annual decline needed for the NNM 2022 target.

Low birthweight depends on various factors: Mother’s nutrition, growth of the baby in the uterus, term at the time of birth and the space between the age of the mother and child.

Since women in India are underweight--one in every five--compared to even sub-Saharan Africa, it is suggested as a reason for low birthweight in India. Chronic undernutrition in mothers results in preterm and low birthweight babies, it is known.

In order to improve children’s health, India will have invest in mother’s nutrition, IndiaSpend had reported here and here.

(Yadavar is a special correspondent with IndiaSpend.)