Sanitation Failures Kill, Stunt Children Most In UP, 4 Other States

Despite recently revealed improvements, primitive sanitation is killing, retarding the growth and leaving susceptible to disease millions of Indian children, according to an IndiaSpend analysis of the latest available national health data.

Uttar Pradesh (UP), Bihar, Madhya Pradesh (MP), Assam and Chhattisgarh had India’s highest under-five mortality, higher stunting (low height-for-age) rates and higher prevalence of diarrhoea due to lack of “improved sanitation”--usually a house with its own latrine connected to a sewer or septic tank--according to the National Family Health Survey 2015-16 (NFHS-4).

Unsafe water, poor hygiene practices and inadequate sanitation are not only the causes of the continued high incidence of diarrhoeal diseases but a significant contributing factor in under-five mortality caused by pneumonia, neonatal disorders and undernutrition, according to this 2016 report by the United Nations Children’s Fund.

Poor sanitation makes unhealthy children prone to water-borne diseases such as diarrhoea, jaundice and cholera, as IndiaSpend reported on January 6, 2016.

Improved sanitation, as we said, refers to a household with its own toilet, connected to a piped sewer system or flush to septic tank, flush to pit latrine, ventilated improved pit/biogas latrine, pit latrine with slab, twin pit/composting toilet, which is not shared with any other household. 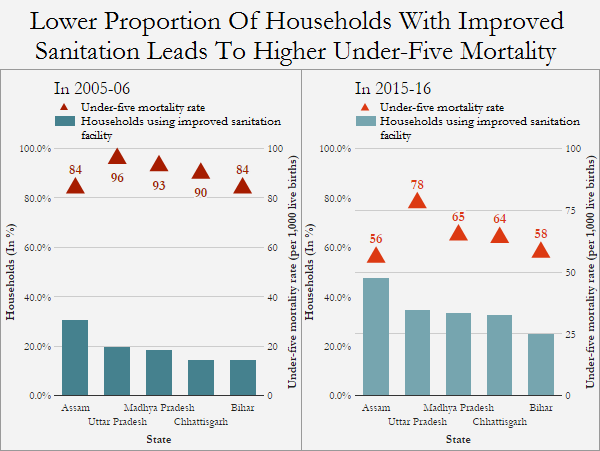 Source: National Family Health Surveys 2005-06 and 2015-16Under-five mortality rate: deaths of children under the age of five per 1,000 live births

Bihar has the the lowest percentage (25%) of households with improved sanitation, and the state recorded an under-five mortality rate of 58 deaths per 1,000 live births in 2015-16.

One of the leading causes of under-five mortality is diarrhoeal diseases, mostly caused due to lack of sanitation, according to this 2015 study by Public Health Foundation of India, a Delhi-based think tank.

Bihar is followed by Chhattisgarh, with only 32.7% of households reporting use of improved sanitation facilities.

Uttar Pradesh has the highest under-five mortality (78 deaths per 1,000 live births) and only 35% households reported use of improved sanitation facilities.

Only 44% rural households in UP reported toilet coverage till October 2016 under the Swachh Bharat Abhiyan (Gramin), a central government programme to make India open defecation-free by October 2, 2019.

As many as 77% rural households practice open defecation (as against the national average of 55%), IndiaSpend reported on October 1, 2016.

Diarrhoeal diseases are the third largest cause of deaths among children under the age of five in India, according to this 2015 study by Indira Gandhi Medical College and Research Institute, Puducherry.

UP, with the highest under-five mortality rate of 78, also reported the highest prevalence (15%) of children suffering from diarrhoea prior to the survey.

Diarrhoeal diseases are also responsible for stunting in children (low height-for-age), according to this 2015 study by The institute of Fiscal Studies, a UK-based think tank.