Prachi Salve
Loading...
|11 Oct 2013 11:10 AM GMT
One of India’s biggest challenges is delivering affordable healthcare to its millions, particularly the poor. Many studies and surveys show how a single illness can swing the financial fortunes of a poor household. It gets worse and more frustrating when the diseases are more like epidemics and the system is unable to respond effectively. Even in cities like Mumbai. For instance, deaths arising from dengue (an infectious tropical disease transmitted by mosquitoes) tuberculosis (TB) and cholera in Mumbai continue to rise despite all efforts. Most are developing world diseases. The only good news is that cases of malaria seem to be coming down. Needless to add, the solution to prevention of many of these diseases might lie outside the healthcare domain, for instance, in sanitation. The figure below shows the number of cases of the four main diseases in the city in 2012-13: Figure 1 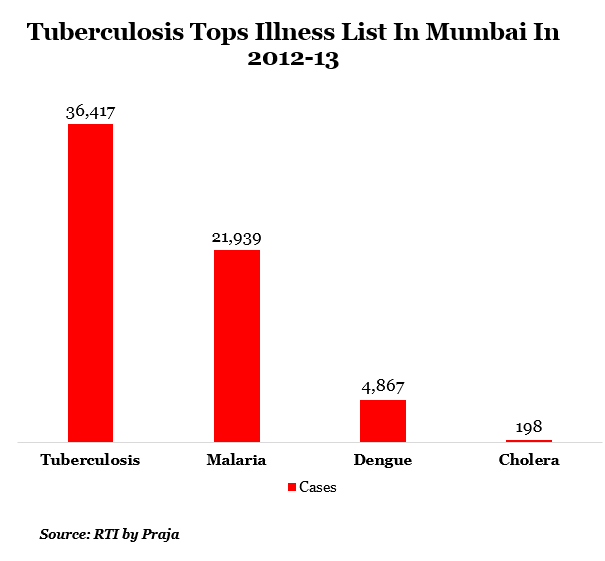 Moreover, it’s evident that more and more patients, including the poor, trust private healthcare to cure them rather than state-owned facilities. A survey conducted by Praja, a Mumbai-based NGO, shows that the poor spent a considerable amount of their income on healthcare, mostly in private health facilities. Let us now look at 5-year data for the cases of malaria, TB, cholera and dengue based on data from the hospitals run by Brihanmumbai Municipal Corporation (BMC) compiled by Praja through a Right to Information (RTI) application filed with the municipal body. Figure 2 While cholera cases increased from 96 in 2008-09 to 198 in 2012-13, deaths due to cholera has come down from 13 to 9 during the same time period. BMC Increasing Health Spending The capital expenditure on health has been increased by BMC from Rs 510 crore in 2011-12 to Rs 655 crore for 2012-13. BMC has also proposed to enhance the capacity of 16 peripheral hospitals. The total number of beds in BMC-run hospitals currently is 11,625, and the plan is to add 1,047 beds over 3 years. So, how many people in Mumbai use the health facilities provided by the BMC? Table 6 shows the pattern of usage: Figure 6 A survey by Praja found that only 31% of Mumbai’s residents visit any kind of municipal hospital/health facility. And a majority of the people (62%) preferred using private hospitals. The Praja survey, conducted in 2012, covered 24,694 citizens from 227 wards across the city. Figure 7 The Praja survey also found that the average spending on health was only 7.1% of the total annual income in Mumbai. Around 45% of the citizens spend less that 5% of their annual income on health followed by 38% people who spend between 6% and 10% of their income on health. While BMC has managed to curb the spread of diseases like malaria, there is a need to step up efforts to check the spread of dengue, TB and cholera. The efforts should not only be in improving health facilities but also related services like raising awareness among citizens and improving services like water supply, especially to curb the spread of cholera. Editor’s Note: IndiaSpend usually sources data first-hand through RTIs though we make occasional exceptions, this report being one of them, having collaborated with Praja.