Puni Garasia (right) sits with her mother in Sirohi, southwest Rajasthan. Puni, 14, a tribal, weighed barely 20 kg when she was detected with tuberculosis in October 2016. Her Body Mass Index was 9.9 kg/m2--a level so low that an expert we interviewed described it as "incompatible with life". Undernutrition is the stark reality of 90% of pulmonary TB cases in India.

“She was all skin and bones,” Dave, an employee of Global Hospital & Research Centre, a health not-for-profit, told IndiaSpend.

On March 24, 2017, World TB Day, the government released a guideline: Nutritional Care & Support for TB Patients in India, the first country-level adaptation of the 2013 World Health Organization guideline for the nutritional care and support of TB patients. Low weight is a classic symptom of TB, a disease associated with wasting away of fat and muscle.

Undernutrition increases the severity of TB, reduces patients’ speed of recovery, and increases their chances of suffering side effects from the medicine, and the likelihood of their becoming one of the 480,000 Indian lives that TB, an infectious airborne disease, claims every year.

When Puni, a tribal from Bhaisasingh village in Sirohi district, came into the mobile clinic, she weighed 20 kg, and had a Body Mass Index (BMI) of 9.9 kg/m2, a level that is “incompatible with life”, said Anurag Bhargava, professor in the Department of Medicine, Yenepoya Medical College, Mangalore, who coordinated with nutritional experts in drafting the new guidelines. The desirable BMI level is 18.5 kg/m2, the ideal 21 kg/m2.

A sputum test confirmed that her body--racked by fever and a persistent cough, other classic symptoms of TB--was indeed being consumed by mycobacterium tuberculosis.

Over the six months following this October 2016 diagnosis, Jayantilal, a health worker living and working in Puni’s village, personally dispensed every dose of the prescribed TB medicines freely available under the Indian government’s Revised National TB Control Programme (RNTCP), and doled out six kilograms each of roasted soy bean and gram, under a nutrition-support initiative for TB patients by the same charity that Dave works for. 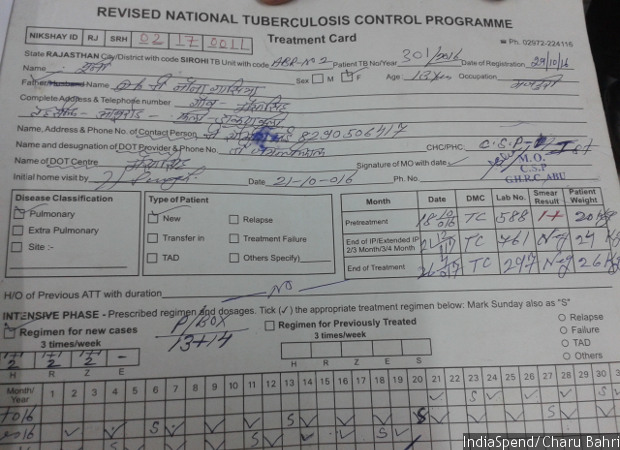 Directly Observed Treatment, Short Course, or DOTS, the prescribed treatment for TB, is available for free. However, patients also need good food to make up the wasting, the loss of fat and muscle that TB causes. TB patients are recommended a protein intake of 1.2-1.5 g/kg/day as against the 1 g/kg/day recommended for the general population.

Prior to the development of anti-TB drugs in the middle of the twentieth century, good food, open air, a dry climate and rest constituted the main treatment for TB, and those who could afford it would retreat to sanatoriums.

With the advent of chemotherapy, the government’s focus turned to the mass delivery of medicine--a necessity as India then had 23,000 TB beds for 1.5 million patients. In this switch, the new policy ignored the role of a balanced diet in patient recovery.

In a landmark study conducted in Madras (now Chennai) in 1959, the success of TB treatment was evaluated on the basis of whether the drugs cleared sputum of the TB bacteria; the finding that participants treated in sanatoriums or hospitals gained twice as much weight as those treated at home went largely unnoticed, even though food insecurity was seen to be an impediment to patients’ completing treatment.

“Under-nutrition is the stark reality of 90% of pulmonary TB cases in India, or more than 1 million patients,” said Bhargava, based on his 2013 study of 1,700 patients from rural India.

TB and under-nutrition have a two-way causal association

Being underweight is both a cause and a consequence of TB.

That 52% of the patients had stunting--low height-for-age--showed that their undernutrition status was chronic, said Bhargava, co-author of the study. 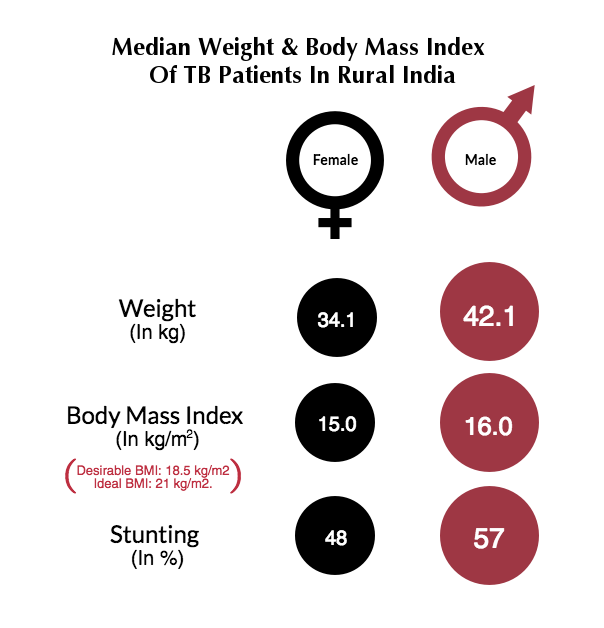 Source: Nutritional Status of Adult Patients with Pulmonary Tuberculosis in Rural Central India and Its Association with Mortality

Every unit reduction in the BMI increases the risk of TB by about 14%, according to this 2010 International Journal of Epidemiology study.

Further, under-nutrition continues to challenge patients both while treatment and after.

It can delay recovery as measured by the time taken for a patient’s sputum to test negative, and severely undernourished patients are between two and four times more likely to die than adequately nourished patients.

A BMI of less than 17 kg/m2 has been associated with a five-fold risk of drug induced hepatotoxicity, or liver abnormality, a potential side effect of the TB therapy, according to this 2014 study in the International Journal of Tuberculosis and Lung Disease.

After the completion of treatment, under-nutrition increases the chances of a relapse and compromises physical activity due to poor muscle strength.

To make up for the wasting, TB patients are recommended a protein intake of 1.2-1.5 g/kg/day as against the 1 g/kg/day recommended for the general population. Ideally, a patient should gain 5% of their body weight in the first two months of treatment, and 10% over three months.

In India, a TB patient is more likely to be poorer, and thus face greater food insecurity.

For instance, the prevalence of TB was 3.7 times more among those with a low standard of living than in those with a medium or a high standard of living, based on criteria such as house type, toilet facility, ownership of agricultural land and house, etc., according to this 2007 study in the International Journal of Tuberculosis and Lung Disease. TB prevalence was 3.3 times more among the landless than among owners of agricultural land, and 2.5 times more in those living in kuchha (makeshift) houses than in those living in pucca houses.

“A patient’s food intake can plummet during sickness if daily wages are his or her source of livelihood,” said Sheela Auguesteen, deputy program director, Resource Group for Education and Advocacy for Community Health (REACH), a Chennai-based not-for-profit that distributes food aid to more vulnerable TB patients.

Without food aid to bridge the gap between the desirable and actual calorie intake, TB patients’ marginal weight gain is barely 3.22 kg, according to this 2009 Indian Journal of Tuberculosis study.

When a family’s bread earner falls sick with TB, the family loses an average 83 days worth of wages, according to this 1999 study that is still considered relevant, said Bhargava. This loss of income further compromises the family’s food security, increasing the patient’s immediate relatives’ risk of contracting TB.

The new nutrition guideline recommends doubling the Public Distribution System ration--a government welfare program for providing food to families living below the poverty line--for twelve months for families with one member suffering from TB, for the six months of the treatment, and six months thereafter. A TB patient additionally needs about 30-40 grams per day of protein from high quality sources like pulses, oilseeds, dried milk powder or groundnuts, the guidelines said.

However, the Health Ministry has ruled out distributing special food rations or nutritional supplements to TB patients as part India’s TB control programme as it is “beyond the scope of the Health Ministry”, Sunil Khaparde, deputy director general for TB control in the Directorate General of Health Services, told IndiaSpend. “Instead, we are planning to provide financial support to TB patients to help compensate the catastrophic expenditure they incur on care. But this is subject to funds being made available,” Khaparde said.

In March 2017, the National Strategic Plan for Elimination of TB, a programme to be implemented between 2017 to 2025, proposed a Rs 2,000 direct benefit transfer for patients’ nutritional support during the course of treatment, and a monthly support of Rs 500 to incentivise treatment completion, IndiaSpend reported in March 2017.

The program envisages spending Rs 3,600 crore in the next three years on nutritional support for patients alone, which is more than the Rs 3,323 crore the entire TB programme received in the last three years put together.

Further, will the payment be sufficient to cover a patient’s nutritional needs? A support programme to be rolled out soon in Chhattisgarh by the state government has set aside Rs 600 per patient per month (or Rs 3,600 for a six-month course of treatment) for a daily intake of 34.7 grams of protein and 818 kcal, the extra nutritional need of a TB patient.

In 2016, patients, who were distributed a vegetarian food basket providing 676 kcal and 25 grams of protein daily gained an average 2 kg over the first two months of treatment. This was part of a pilot project in six blocks in the district of Rajnandgaon in Chhattisgarh. The pilot used Designated Microscopy Centres, where sputum samples are tested, as a distribution point for high energy and protein food aid.

The Chhattisgarh government trained laboratory staff on the importance of nutrition for TB patients, weighing and measuring the height of eligible patients, counselling patients, and weighing and storing food, Prabir Chatterjee, executive director of the State Health Resource Centre in Chhattisgarh, told IndiaSpend.

When the initiative is rolled out across the state, a first for India, the quantity of food given to patients would be increased to provide 818 kcal and 34.7 grams of protein daily, said Chatterjee.

Back in dusty Rajasthan, Puni, now TB-free, gained 6 kg over the course of treatment, gaining 4 kg in the first two months alone. Her BMI increased to 12.9 kg/m2--still 30% lower than the desired level and 38.5% lower than the ideal level, according to standards prescribed by the new government guidelines--but she blends in with the largely undernourished community she is a member of. 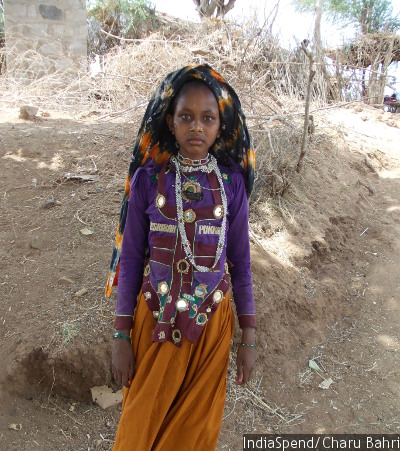 Nutritional supplements distributed during the six months Puni Garasia, 14, a tribal, was taking medicine for TB helped her gain 6 kg. Without in-kind food assistance or monetary support for a better diet, she was unlikely to gain any weight because her family is food insecure.

“She no longer looks like a TB patient,” said Dave, the community doctor.

(Bahri is a freelance writer and editor based in Mount Abu, Rajasthan. She has been aasociated for over two decades with Global Hospital & Research Centre, one of the not-for-profits mentioned in this story, where among other things she assists in fund raising for community initiatives, such as the one described in the story.)