Mumbai: Even as the number of positive COVID-19 cases spikes, the nationwide lockdown has pushed India’s millions of migrant workers, the bulk of whom live in and around urban centres, into a state of extreme vulnerability and peril. Combined with the immediate loss of daily wages and lockdowns in major source states such as Uttar Pradesh, Bihar, Odisha and West Bengal, a storm of socio-economic exclusion, livelihood loss and public health hazards due to contagion risks is brewing. 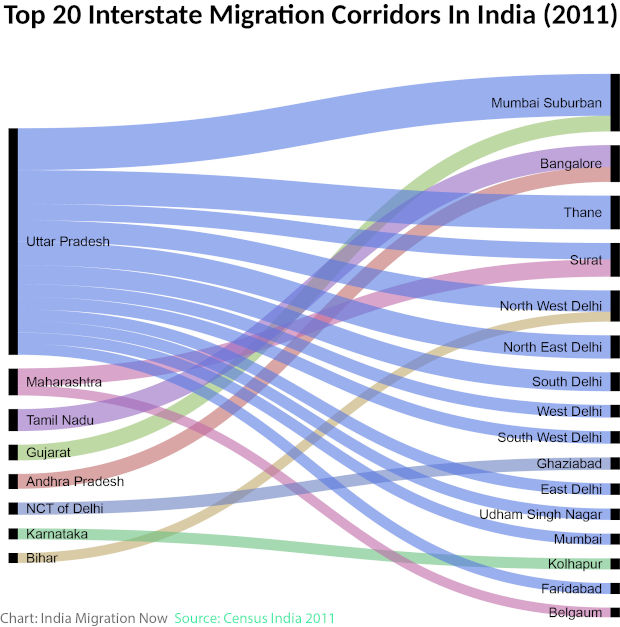 A day before the Janata Curfew announcement on March 21, 2020, hundreds of thousands rushed to train and bus stations to head back home, according to ground reports. This never-before, countrywide reverse migration increases the risk of the virus spreading, as has been seen in Italy in early March 2020 and China in January 2020.

Internal migration in Italy typically moves from the country’s south to its prosperous northern regions, according to a 2015 paper published in the journal Demographic Research. On March 8, 2020, hours before the Lombardy region was locked down, a news leak led thousands to crowd railway stations and jam roads. The reverse migration led to cases in the south (centre, south and island regions) to spike from 51 on February 29 to 16,164 on March 27, 2020, according to data released by the Italian government. As of March 28, 2020, Italy has 86,498 registered cases, according to data collated by the Johns Hopkins Coronavirus Resource Centre.

In China, five million fled the Wuhan province before the lockdown was announced, according to a January 26, 2020, news report by South China Morning Post. The population that emigrated from Wuhan was the “main infection source” in other Chinese cities and provinces--some cities with few cases showed rapid increase in infections, a February 2020 analysis published in the National Center for Biotechnology Information at the US National Library of Medicine showed. This was also driven by the fact that the Chinese Lunar New Year holiday coincided with the emergence of COVID-19. People in China are estimated to make close to 3 billion trips over the 40-day travel period, or Chunyun, of the Lunar New Year holiday.

In the aftermath of the lockdown, Wuhan residents who had escaped also faced discrimination and ostracisation in other parts of China, according to a February 4, 2020 news report by Inkstone, a Hong Kong-based publication.

There are upwards of 60 million migrant workers in Mumbai, Kolkata, Hyderabad, Chennai, Bengaluru and Delhi, according to the 2011 Indian Census. Some 33% of these migrants hail from Uttar Pradesh, 15% from Bihar and 6% from Rajasthan, followed by Tamil Nadu, Andhra Pradesh and National Capital Territory of Delhi at 5% each, as per India Migration Now, a Mumbai-based nonprofit.

On March 24, 2020, the Indian government invoked the National Disaster Management Act 2005, which put the country under lockdown for 21 days. Subsequent guidelines shut down all commercial and private establishments except for essential services to minimise human-to-human contact. The lockdown also sealed state borders by halting all transport services--air, rail and road. This put the brakes on the livelihoods of millions of workers in the unorganised sector, including internal migrants, millions of whom were stranded without any source of income.

In the days leading to the March 24, 2020 lockdown, Mumbai’s train stations witnessed a surge of migrants attempting to return home. Central Railway Services added 17 special trains to the 47 already scheduled, The Wire reported on March 22, 2020.

While no statistics are available yet on the exodus following the March 24, 2020, lockdown announcement, hundreds of thousands are expected to have tried to take any route available--train, bus, by foot--to return home.

Thousands of labourers are now walking from Delhi to UP (NH9- Delhi -Meerut road). Numbers have swelled to several thousands during the last couple of hours, says my friend, @deepangshu who shot this video from an apartment in Indirapuram. pic.twitter.com/NNtXFmyiDk

It is imperative for workers from Uttar Pradesh (UP) working across the country to return home but stay in isolation, the state’s health minister said. UP ranked at the bottom among 21 large states in Niti Aayog’s Health Index report published in June 2019. UP was followed by Bihar, Odisha, Madhya Pradesh, Uttarakhand and Rajasthan, all major home states for migrants.

Experts say migrants who are currently travelling on the roads are burdening the health systems and also impacting their own health. “There are multifold issues here like lack of food, lack of proper water, sanitation etc. along with the stress that they are being subjected to,” said Indranil Mukhopadhyay, associate professor for public health at the OP Jindal Global University in Sonipat, Haryana. “In general, the population has health diseases like diarrhoea, TB [tuberculosis], malnutrition among children and adults, which might make them more vulnerable to any infection.”

“Another issue is that we have virtually no information or maybe to say, very little information, on community contamination,” Mukhopadhyay said. “So, it might well be the case that some of the people may have contracted disease and are infected. They might be asymptomatic but are now travelling together and in this process might as well spread the disease.”

The table below shows that the five states that send out the most number of migrants, many of them now returning, are also home to 39% of registered TB patients (2016)--a high-risk category for contracting COVID-19 and expected to have the worst treatment outcomes, as we reported on March 24, 2020.

With the exception of West Bengal, all these states register higher infant mortality rates than the national average, government data submitted to the Rajya Sabha in March 2020. Infant mortality rates are considered an important indicator of the overall health of a community and its healthcare infrastructure, according to NITI Aayog health index.

“It [the migration] will impact an already weak and under-resourced health system, which has been underperforming on separate counts of health design because it is designed as a minimalist system,” said T. Sundararaman, former professor and dean of the School of Health Systems Studies at the Tata Institute of Social Sciences, Mumbai. “Right now [the health system] is not in a position to handle the existing load but it also has to respond to the coronavirus epidemic. So, it is already distracted from its core function and another large lot of poor and sick people are coming in.”

The table below shows that the health systems in these states are stressed for resources. For example, the average allopathic doctor-to-population ratio is higher than the national average. Uttar Pradesh has the highest population per doctor with one allopathic doctor serving 3,692 people, according to a reply in Rajya Sabha in March 2020, as against the World Health Organization recommendation of one doctor per 1,000 patients.

In Bihar's government hospitals, there is one bed for 8,645 people; in Uttar Pradesh, one for 2,904 people, according to the national health profile 2018.

The table below shows that the migrant states are home to 43% of India’s population, but 18% of its COVID testing labs, according to the HealthCheck’s Coronavirus Monitor. Maharashtra alone has 20 testing labs, followed by Tamil Nadu (14), Delhi (13) and Kerala (10). Indian states and union territories that have more testing centres and are testing more samples are reporting higher numbers of confirmed COVID-19 cases, as IndiaSpend reported on March 25, 2020.

Experts suggest that roadside shelters be provided for the migrants currently en route home. “The government needs to create dharamshalas, where these people can rest and social distancing can be observed,” Sundaraman told IndiaSpend. “Moreover, health stations can be provided where screening can be done so that COVID-19 patients can be identified and quarantined. These stations will also help those travelling with cuts and bruises on their feet and give them required medical attention.”

Some steps are being taken, but they are not enough, said Chhaya Pachauli, director of the NGO Prayas, which is spearheading an effort to help traveling migrants during the lockdown. “Yesterday, there was a large group of migrants who were travelling from Gujarat to the southern district of Pratapgarh [in Rajasthan],” she said. “We persuaded the government of Rajasthan to arrange for a bus at the border of Gujarat in Himmatnagar. Buses ensure that those who are travelling in it can receive screening at the border and also some kind of advisories about the disease. This will avoid them taking shorter routes through villages and risking further spread of the disease.”

Stranded migrants: How can they be supported?

Although a large number of migrants are being seen fleeing cities, most are still stranded in destination and transit states. Countries such as Egypt, Philippines and Brazil have already introduced cash assistance programmes for informal workers affected by this outbreak, as noted by Dvara Research, a financial policy research institution.

Finance Minister Nirmala Sitharaman announced a financial package on March 26, 2020. However, no roadmap has been announced for how benefit transfers would be accessed during the lockdown, we reported on March 27, 2020. 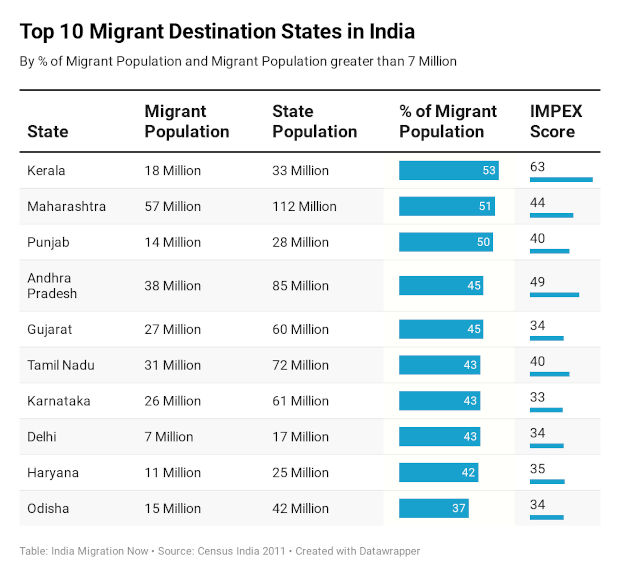 In destination and transit regions, there should be provisions for food and decongested living arrangements, said Benoy Peter, executive director of the Centre for Migration and Inclusive Development based in Perumbavoor, Kerala. One effective way is through the immediate removal of domicile restrictions denying migrants access to state-level social welfare, healthcare, household and nutritional programmes and schemes, as showcased by India Migration Now’s 2019-20 InterState Migrant Policy Index (IMPEX) results. Experts have suggested universalising and doubling free food entitlement (through the Public Distribution System, or PDS).

“The outbreak is going to have huge nutritional implications for the migrant households. Undernutrition is a serious concern in times of crisis,” said Divya Ravindranath, a postdoctoral researcher at Indian Institute of Human Settlements. “A huge proportion of children, among seasonal migrants that travel with families, are malnourished and any loss of wages further accentuates that.” In urban areas, migrant workers can be given access to community kitchens, safe space for sleeping either in existing government buildings, schools and community halls, she suggested. Some state governments, NGOs and private companies have started providing packs of food items (grain, dal, oil, salt, etc).

While the closing of state borders buys India time to avoid the trajectory of Italy and China, adequate public health and livelihood measures must ensure that migrant workers--and hence, India--can safely navigate this pandemic, evidence shows.

(Aggarwal and Singh are with India Migration Now. Salve is an IndiaSpend contributor.)