New Delhi: Seven of 85 villages audited in Jharkhand and Rajasthan had adolescent-friendly health services, 11 provided quality sanitary pads accessible to all young women, less than half (37) had clean, usable and separate toilets for girls in government schools, and five had proactive awareness campaigns about the dangers of child marriage and early pregnancy, social audits conducted during July-September 2019 found.

Investing in adolescent health is crucial for India to attain Sustainable Development Goals, improve the country’s adult health outcomes, and add productive adults to the workforce, as IndiaSpend reported in November 2017.

A team of 300 girls visited 63 villages in six Jharkhand districts and 22 villages in three Rajasthan districts to raise awareness about child marriage, sexual health, education, security and nutrition of adolescent girls. The campaign, ‘Ab Meri Baari’, was launched in early 2019, by the 10to19 Adolescents Collaborative, a group of non-profit organisations working on adolescent issues in India.

The team, led by Dasra, a Mumbai-based strategic philanthropy organisation, in collaboration with the 10to19 Adolescents Collaborative, travelled 3,296 km and spoke to primary health workers, medical officers, government health officials and fellow adolescent girls. The team also visited Uttar Pradesh (UP) to conduct awareness campaigns, but social audits were not held in UP.

Early marriage leads to dropouts, motherhood at a young age, and a higher probability of domestic and sexual violence. Early pregnancies lead to adverse pregnancy outcomes, such as eclampsia (seizures during pregnancy), low birth weight, neonatal death and congenital malformation.

Pregnant adolescents are also more likely to leave school, affecting their and their family’s future, as IndiaSpend reported on January 12, 2019.

In 2010, the Women and Child Development Ministry launched SABLA, a scheme to empower adolescent girls, in 200 districts of the country. Under the scheme, each district has to conduct awareness campaigns to sensitise adolescent girls about early marriage.

Yet, there are gaps.

Similarly, Jharkhand had the 3rd highest proportion (38%) of women aged 20-24 who were married before they were 18 and Rajasthan had the 4th highest (36%), data show.

Yet, 80 of the 85 villages audited in nine districts in Jharkhand and Rajasthan did not have proactive awareness campaigns about the effects of child marriage, according to social audits conducted between July and September 2019.

Swati Kumari, 16, is a class XI student in Barasloy village in Jharkhand’s Simdega district. Her friend Naina (not her real name) was forcibly married off at the age of 14. Naina had to dropout from school to live with an alcoholic husband. She had a child at age 15--her in-laws forced her despite her opposition. “On account of going through so much at a young age, she was mentally weak,” Swati Kumari said. In 2018, Naina killed herself.

Naina’s experience pushed Swati Kumari to act. She is now part of the Ab Meri Baari campaign, and along with others in the team--referred to as ‘champions’--she helps spread awareness about child marriage through street plays.

Awareness campaigns about child marriage, early pregnancy and the related dangers were found in anganwadi centres in only 47 of the 63 villages in Jharkhand where the social audit was conducted.

Only in three villages, this information was proactively shared and explained through regular campaigns. In 10 villages, nothing was being done to spread awareness, the team found.

The situation was similar in Rajasthan.

Only two of the 22 villages audited had regular campaigns by anganwadi centres to spread awareness about child marriage, early pregnancy and associated risks.

“I got married at the age of 7-8 years, but I continue to live with my parents,” said Seema Jat, 19, who lives in Rajasthan’s Udaipur Khera village. “I am continuing my studies because of my family’s support but this is not the case with everyone.”

Seema Jat’s friend Maya was also married at a similar age. “Before her ‘Gauna’ could be solemnised [after which the bride is sent to live with the groom’s family], in class XII, she gave birth to a girl,” Seema Jat said. “Her studies were stopped and her husband did not support her.”

Only in 19 of the 63 villages audited in Jharkhand were adolescents being educated about the Protection of Children from Sexual Offences (POCSO) Act and Juvenile Justice (Care and Protection of Children) Act, in block hospitals or community health centres through display of information or awareness campaigns. In 41 villages, the team found no form of awareness or information dissemination about these laws amongst adolescents. 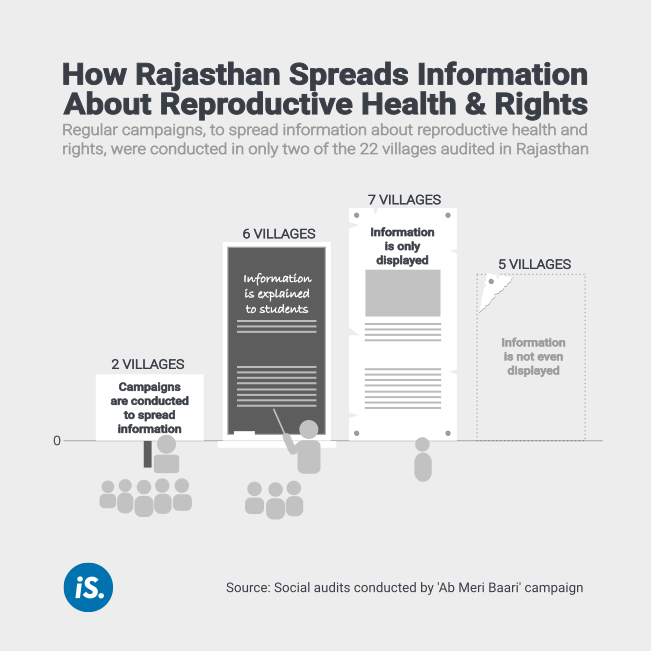 None of the villages had campaigns to spread information about grievance redressal in cases of sexual violence. Only in 10 villages, this information was displayed.

Pads were not available in anganwadi centres or health centres in Kunjora village of Jharkhand’s Deoghar district, Kumari Priyanka Pandey, 21, a resident of the village, told IndiaSpend. However, her village has a school where pads are provided to girl students. “We have to travel outside the village to buy pads,” Pandey said.

Swati Kumari, the Ab Meri Bari champion, also has to travel outside her village in Jharkhand’s Simdega district to buy pads--each packet costs Rs 35-40. “Our school does not distribute pads and they are not available in the anganwadi centre” she told IndiaSpend.

Often, with the onset of menstruation, adolescent girls drop out from school or attend less frequently--because of a lack of hygienic toilets, lack of water and a pad-disposal system in schools. In rural India, 23% of girls listed menstruation as the chief reason for dropping out of school, as IndiaSpend reported in June 2017. 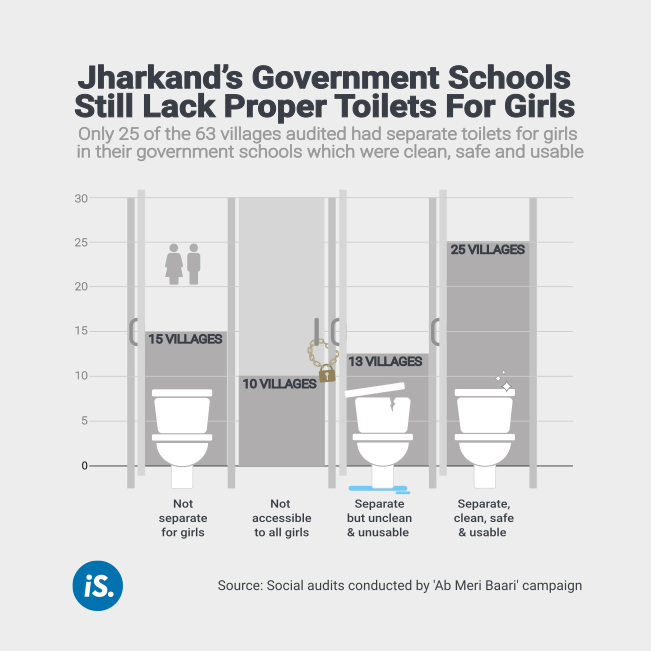 Solutions suggested by the team under the ‘Ab Meri Baari’ campaign:

(Tiwari is a principal correspondent with IndiaSpend.)

Sadhika is a development journalist based in New Delhi. She has covered public health, gender issues and environment during her journalism career, which started with her internships during her undergraduate studies with organisations like NDTV 24x7, Asian Age, Gaon Connection and Economic Times. She has previously worked with GoNews, India's first app-based news channel as an anchor and senior correspondent where she also covered the 2019 general elections from the hinterlands of India. She holds an honours degree in Journalism Bachelors from Delhi University.