New Delhi: Pramod sells a rare commodity--blood. Paid ‘blood donation' may have been banned in India by a 1996 Supreme Court ruling, but touts like him are a common sight in hospitals across India.

Pramod met this reporter at a tea stall next to Gate No 1 of the All India Institute of Medical Science (AIIMS) in south Delhi. Dressed in a shabby black shirt and a pair of track-pants, the greying tout was confident he could bypass the rules.

The first part of this series revealed how 14,474 cases of HIV infection through blood transfusion have been reported in India in the last seven years, and that the government has not even begun to address the crisis.

In this second and concluding part, IndiaSpend looks at why the chances of an HIV patient in India having acquired the virus through blood transfusion are 3,000 times higher than in the US.

The reasons range from the limitations of the testing technology used in India to the illegal market in blood donation and the lack of official remedial measures.

The question of ‘window period’

The “window period” of a test is critical to ensuring the safety of the donated blood. This is the period during which HIV cannot be detected by a test, even if a person is infected.

The shorter the window period of a test, lower the chances of infected blood being used for transfusion.

The current mandatory test in India is the ‘enzyme-linked immunosorbent assay’ or ELISA. The window period for the commonly used third-generation ELISA is around 21 days. The more advanced ELISA IV cuts the window period to about 14 days.

But NAAT is not the mandatory Indian standard, and it is not widely used.

“There should be policy for enhancement of technology like NAAT," said Vanashree Singh, director of Indian Red Cross Society. "Why have developed countries adopted it?”

The King George's Medical University in Lucknow was the first to use NAAT in Uttar Pradesh, with dramatic results.

To use NAAT, blood samples have to be first tested using ELISA. The extra cost for testing a unit of blood with NAAT is about Rs 900.

Government not ready to update technology

“When we are dealing with the subject of life of a citizen, the cost should not be a factor so far as the Government is concerned... Life is priceless,” said the Gujarat High Court in a reply to a 2013 public interest litigation (PIL) that sought the use of NAAT.

The court had then referred the matter to an expert committee which found “NAAT technically demanding" and blood banks "not equipped enough to carry it out for service purpose”.

It also said “NAAT may help to detect – infinitesimally small proportion – of additional positive samples at a great cost”.

The court finally dismissed the PIL, despite the committee’s observation that “NAAT screening ensures 99.99% blood safety”.

In the US, all blood donations since 2001 have been screened for HIV using both ELISA and NAAT.

“There have been close to no HIV cases associated with blood transfusion in the United States each year,” said Jonathan Mermin, director of the National Center for HIV/AIDS, Viral Hepatitis, STD, and TB Prevention in the US. “Since all blood donations are screened by nucleic-acid testing, it (infection through blood transfusion) is theoretically possible but would be very rare.”

With the current infrastructure and funding, however, only a phased change is possible, said Sobhini Rajan, additional director general at the National AIDS Control Society (NACO).

“We should first make ELISA IV mandatory and slowly move to NAAT--that’s the only practical way,” she said.

Why ‘professional’ blood donation is risky

Outside AIIMS, Pramod poured tea into a paper cup for me but he doesn’t have any himself. “I’m a little drunk," he admitted. “I drink. But I gave up drugs long back.”

Pramod is a native of Ballia in eastern UP and has been a professional donor for many years. He has no other job.

He said he has “boys” waiting to give blood: "They’re clean boys. And if they’re not available, I’ll give.”

This kind of donation can be dangerous for those who receive blood. “Professional donors won’t disclose their true history while donating blood. This can lead to transmission of diseases through transfusion,” said Singh.

There are 81 districts in India without a government blood bank and this leaves millions of people vulnerable. “In rural areas, there is greater shortage of blood and people are still afraid to give blood,” said BB Sinha, chairman of the Red Cross Blood Bank in Bihar, a state with a shortfall of around 900,000 units of blood a year.

India is 35 tankers of blood short of its requirement, IndiaSpend had reported in September 2016.

“Nursing homes transfusing blood without license are common in rural areas,” said Sinha. “If the government shuts them down, where will people go?”

IndiaSpend spoke to two government officials who inspect blood banks to understand why things were they way they were.

“Of the 62 blood banks in Odisha, 58 were working on an expired license,” said a senior official of the union ministry of health and family welfare who inspected the state’s blood banks a year ago. “Some of them have been functioning without a license since 1999.”

She said these labs have little infrastructure, are badly equipped and lack trained staff.

Another inspector from Lucknow said some private blood banks are so much into profiteering that they are not beyond adding saline to it “to turn one unit of blood into two”.

It’s not just HIV that is transmitted through blood transfusions; patients worst affected are thalassemics.

The other big risk--Hepatitis C

Sangeetha, 32, was diagnosed with thalassemia--a genetic blood disorder that requires patients to undergo a lifetime of monthly blood transfusions--when she was six months old.

She has been getting two blood transfusions a month for as long as she can remember at the Kalavati Saran Children’s Hospital in New Delhi. In 2002, she tested positive for Hepatitis C.

“Of the 450 thalassemic patients in the hospital where I get my transfusions, about 30-40 people have either contracted Hepatitis C or HIV,” she said. “I always knew that I was in the risk zone, so I was not surprised.” 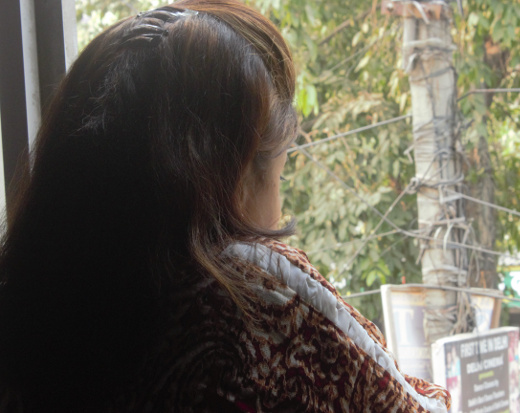 Sangeetha, 32, was diagnosed with thalassemia when she was six months old, and has been getting two blood transfusions a month for as long as she can remember. In 2002, she tested positive for Hepatitis C.

It was only when the treatment for Hepatitis C started that Sangeetha started to feel the effects. “I would start shivering after taking the injections and fall ill frequently. There was extensive hair loss too,” she said.

JS Arora, president of the National Thalassemic Society, estimated that at least 10% of thalassemics contract Hepatitis C through blood transfusion.

“The present rate is under 1% and this is why there was no explicit mention of a target in the current programme,” said a NACO official.

NACO said in a recent report that the “complex structure” of the system monitoring blood banks is a major problem: Currently, they are monitored by the state food and drug control bodies, while the license is issued by the Drug Controller General of India and the guidelines are set by the National Blood Transfusion Council.

“Multiplicity of controls at the central level for policy, regulation and programme, with lack of coordination, is resulting in inefficient handling of blood transfusion services in the country,” the report said.

“Even if you want to get blood from a government blood bank, you will be asked to give replacement blood. In the scramble for a replacement donor, relatives of patients come up with people who are not trustworthy,” said Singh.

Voluntary blood donation, according to experts, is the safest. And they want it promoted through awareness drives. “This will decrease the chances of infection,” Sinha said.

(Babu is a New Delhi-based independent journalist and a member of 101Reporters.com, a pan-India network of grassroots reporters.)

Series concluded. You can read the first part here.

Lorem Ipsum is simply dummy text of the printing and typesetting industry. Lorem Ipsum has been the industry's standard dummy text ever since the 1500s, when an unknown printer took a galley of type and scrambled it to make a type specimen book.