India added 450 million people over the 25 years to 2016, a period during which the proportion of people living in poverty fell by half. This period of rising prosperity has been marked by a “dual-disease burden”, a continuing rise in communicable diseases and a spurt in non-communicable or “lifestyle” diseases, which accounted for half of all deaths in 2015, from 42% in 2001-03. 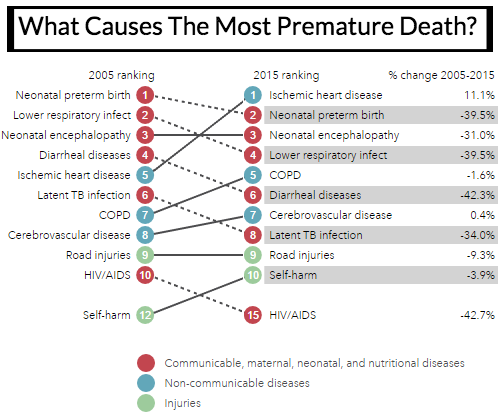 The result of this disease burden on a growing and ageing population, economic development and increasing health awareness is a healthcare industry that has grown to $81.3 billion (Rs 54,086 lakh crore) in 2013 and is now projected to grow by 17% (compounded annual growth rate, or CAGR) by 2020, up from 11% in 1990. 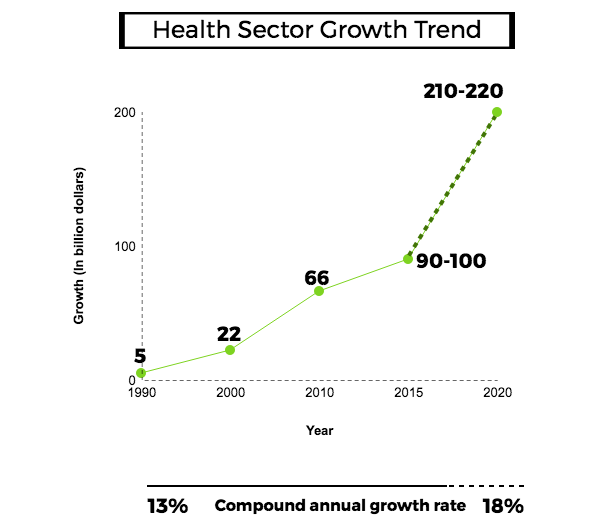 As that happens, in rural areas, mobile technology and improved data services are expected to play a critical role in improving healthcare delivery. Although limited, some companies are also investing in innovative services and creating lucrative yet low-cost digital and device solutions, an example of which would be GE Healthcare’s Lullaby Baby Warmer.

Launched in 2009, the Lullaby baby warmer provides direct heat in an open cradle to help newborn babies adjust to room temperature. At $3,000 (Rs 193,245) per unit in India, the Lullaby warmer is cheap compared to the baby warmer GE sells in the US; that warmer costs four times as much, starting at $12,000 (Rs 772,980), although, in addition to its basic warming function, the monitors sold in the US also check a baby’s pulse and weight.

About 1,500 of the Lullaby baby warmer sold in the first year after launch—half of those in its original intended target market: Smaller, rural towns in India. It has since been sold in 62 countries, including Belgium, Brazil, Dubai, Egypt, Italy and Switzerland.

However, despite some advances, India’s healthcare sector must deal with a plethora of challenges, as our analysis of national health spending indicates: 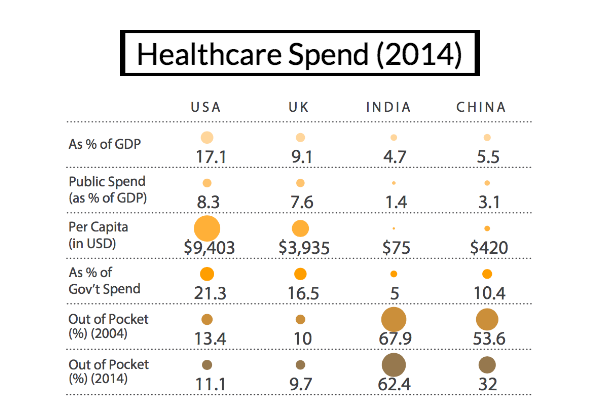 Despite the lowest government spend and public spend, as a proportion of gross domestic product (GDP) and the lowest per capita health spend--China spends 5.6 times more, the US 125 times more--Indians met more than 62% of their health expenses from their personal savings, called “out-of-pocket expenses”, compared with 13.4% in the US, 10% in the UK and 54% in China.

India’s existing infrastructure is just not enough to cater to the growing demand.

While the private sector dominates healthcare delivery across the country, a majority of the population living below the poverty line (BPL)--the ability to spend Rs 47 per day in urban areas, Rs 32 per day in rural areas--continues to rely on the under-financed and short-staffed public sector for its healthcare needs, as a result of which their healthcare needs remain unmet.

Moreover, the majority of healthcare professionals happen to be concentrated around urban areas where consumers have higher paying power, leaving rural areas underserved, as the table below reveals. 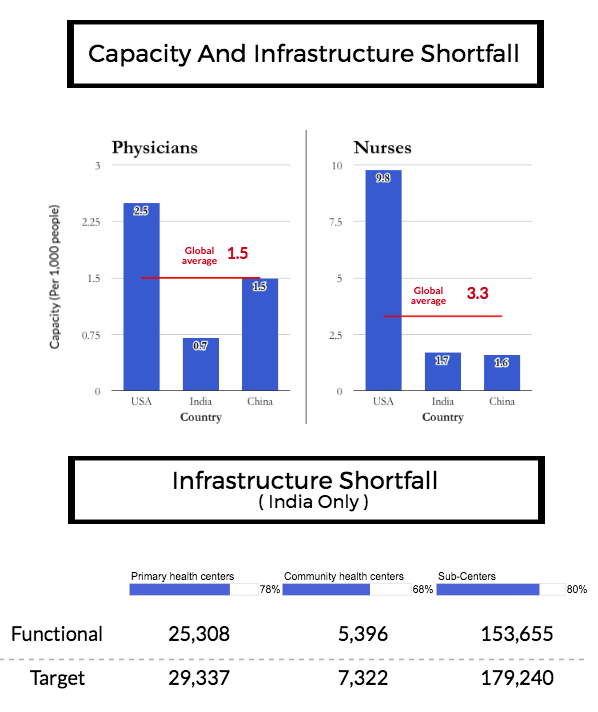 India meets the global average in number of physicians, but 74% of India’s doctors cater to a third of the urban population, or no more than 442 million people, according to this KPMG report.

India compares unfavourably with China and the US in number of hospital beds and nurses. The country is 81% short of specialists at rural community health centres (CHCs), and the private sector accounts for 63% of hospital beds, according to Indian government health and family welfare statistics.

Some of the key roadblocks, then, for India’s healthcare industry:

1. Population: India has the world’s second-largest population, rising from 760 million in 1985 to an estimated 1.3 billion in 2015. Migrants from rural areas continue to flock to urban settlements; roughly 32% of them inhabiting cities--although estimates of this migration vary--that are already bursting at the seams.

2. Infrastructure: India’s existing healthcare infrastructure is just not enough to meet the needs of the population. The central and state governments do offer universal healthcare services and free treatment and essential drugs at government hospitals. However, the hospitals are, as we said, understaffed and under-financed, forcing patients to visit private medical practitioners and hospitals.

3. Insurance: India has one of the lowest per capita healthcare expenditures in the world. Government contribution to insurance stands at roughly 32%, as opposed to 83.5% in the UK. The high out-of-pocket expenses in India, as we detailed earlier, stem from the fact that 76% of Indians do not have health insurance, according to data from the Insurance Regulatory and Development Authority. 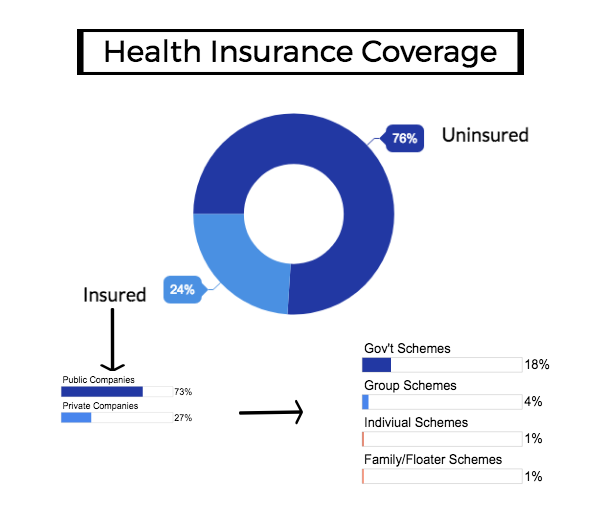 4. Rural-urban disparity: The rural healthcare infrastructure is three-tiered and includes a sub-center, primary health center (PHC) and CHC. Indian PHCs are short of more than 3,000 doctors, with the shortage up by 200% over the last 10 years to 27,421, as IndiaSpend reported in 2016.

There are, however, potential catalysts to improve the quality of healthcare in India.

The government, information technology and innovation

The Union Budget 2017–18 includes measures to boost rural development, infrastructure and macroeconomic stability, and although the health budget has been increased 27%, allocations could have been matched more holistically with the government’s ambitions, particularly when considering adjustment against inflation and new health-program announcements.

Analysts argue that the national insurance scheme (the Rashtriya Swasthya Suraksha Yojana) is a minor improvement on the existing one, with the annual limit per family increased from Rs 30,000 to Rs 100,000, with an additional “top-up” of Rs 30,000 for senior citizens. Our estimates suggest that enrolling all BPL families in the country in health-insurance programmes would cost anywhere from Rs 2,460 to Rs 3,350 crore, or less than the cost of two French Rafale fighters.

Information Technology (IT) is set to play a big role with IT applications being used for social- sector schemes on a large scale. Beneficiaries are issued a biometric-enabled smart card containing their fingerprints and photographs. Hospitals empaneled under the government insurance scheme are IT enabled and connected to servers in districts. Beneficiaries can use a smart card that allows them to access health services in any empaneled hospital across India.

Driven by investment, starts, healthcare is poised to change

As technology increasingly plays an important role in healthcare, the data indicate growing attention from private investment and startups. 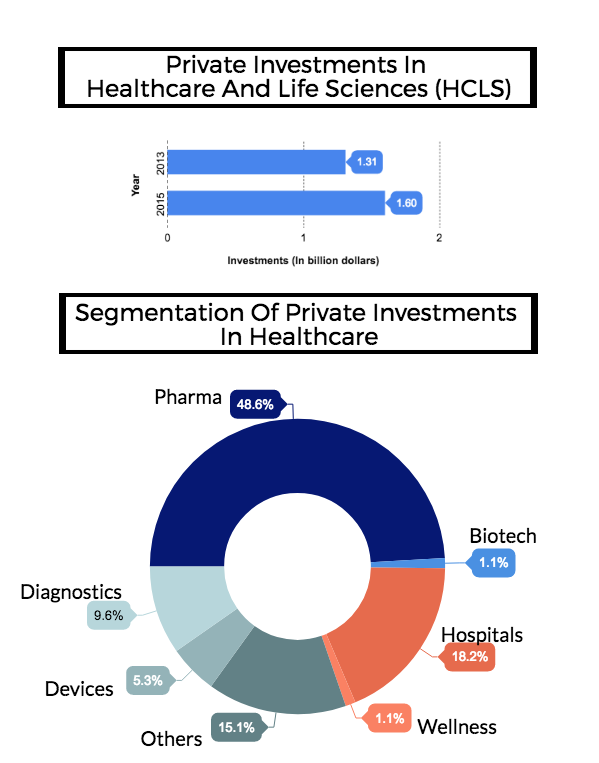 The government’s National Innovation Council, which is mandated to provide a platform for collaboration amongst healthcare domain experts, stakeholders and key participants, should encourage a culture of innovation in India and help develop policy on innovations that will focus on an Indian model for inclusive growth.

Additionally, there has also been an emergence of “frugal innovation” in the private sector — products and business models that offer quality diagnostics and care at a much more affordable price.

Healthcare delivery in India is now uniquely poised to undergo a change at all its stages - prevention, diagnosis, and treatment. No single entity in the healthcare sector can work in isolation.

The evolution of the sector calls for involvement from all stakeholders and the use of innovation to bridge intent and execution. India has the opportunity to leap-frog a lot of the healthcare problems that developed nations are grappling with, such as unlinked electronic medical records and overspending.

The question is, can she seize the opportunity?