Twelve of 18 poultry farms surveyed reported using antibiotics to boost growth of chickens. Among the antibiotics used were tetracyclines and fluoroquinolones, popular medicines used to treat humans. This rampant misuse increases the chances of bacteria developing resistance to antibiotics, paving the way for human infections that are harder or impossible to treat.

Antibiotics are being routinely administered to chickens on Indian poultry farms in small doses to promote growth and keep disease at bay, almost as a replacement for nutrition and sanitation, says a new study led by Ramanan Laxminarayan, director of the Center for Disease Dynamics, Economics & Policy, Washington DC and New Delhi The study has been published in the journal Environmental Health Perspectives.

Twelve of the 18 farms studied, or 67%, reported the use of antimicrobials as growth boosters. Tetracyclines and fluoroquinolones, antibiotics commonly used to treat cholera, malaria, respiratory and urinary tract infections in humans, were the most commonly used antimicrobials, with nine farms admitting their use.

This has serious implications for India—already the world’s biggest consumer of antibiotics for human use—and the world because it contributes to the emergence of antibiotic-resistant bacteria.

Antibiotics fascinate Laxminarayan because they “underpin our modern healthcare system”, he said. As someone who has dedicated himself to the understanding of drug resistance as a problem of managing a shared global resource, he found the lack of awareness about antibiotics in India appalling. Consumers in India, it would seem, are largely indifferent to the circumstances in which their butter chicken is bred.

In an interview to IndiaSpend, Laxminarayan talked of the consumer’s role in reforming the poultry industry, particularly because of the fast-growing popularity of chicken in India and a 312% antibiotic-use increase projected for livestock. 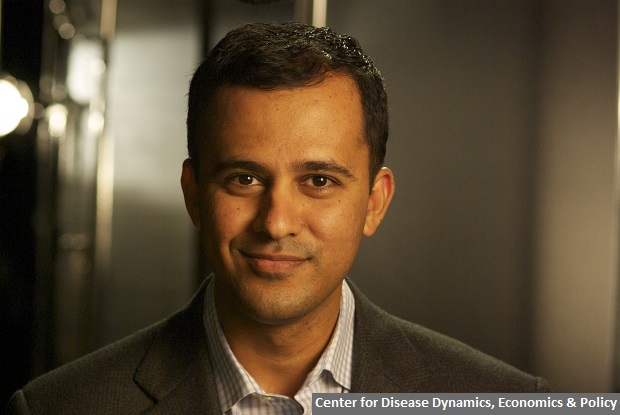 Q: Chickens that are provided good nutrition, clean water and kept in hygienic pens don’t need antibiotics. Consumers abroad are aware of concepts like free-range chicken farming and pastured poultry which require that animals be reared ethically. But Indian consumers remain largely ignorant of these issues. You found that here, antibiotics are being used as a cheap substitute for basic nutrition and treatment. In the 18 farms you visited, you found large flocks, more than 50,000 birds, kept in confined areas lacking proper sanitation. To what extent does the lack of consumer awareness in India impede reform? What are the laws on the use of antibiotics as growth promoters in the poultry industry in the US, the European Union and India?

Government agencies in India including the Central Drugs Standard Control Organization and the Food Safety and Standards Authority of India have the regulatory authority to impose restrictions on the use of antibiotics as growth promoters in poultry but have not moved in this direction so far. 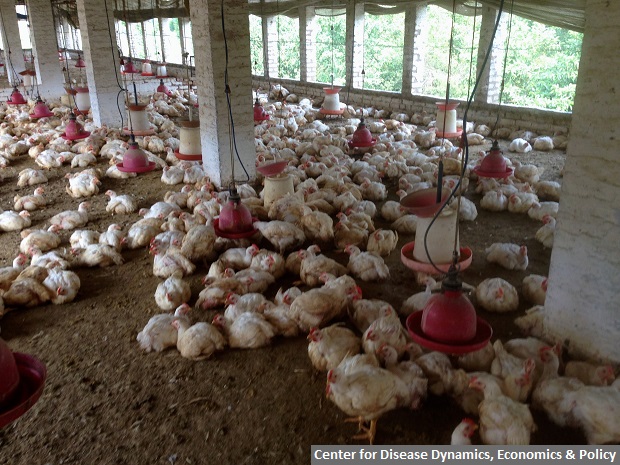 This Environmental Health Perspectives study found that large poultry farms keep more than 50,000 birds in confined areas lacking sanitation and feed them a poor diet. Most of the poultry feed available in India is premixed with antibiotics to cater to the market demand.

In India, low farmer awareness is as much a concern as low consumer awareness. In the absence of regulation, most of the poultry feed available in the market is medicated. But the majority of the farmers we surveyed reported being unaware of the presence of antibiotic growth promoters premixed in chicken feed purchased from feed mills. Some farmers are genuinely unaware of the potential harm from using antibiotics as growth promoters. One farmer noted that antimicrobials were more effective than hygiene or sanitation measures because the labour on poultry farms is unskilled. Of course, this is an excuse to continue misusing antibiotics. India saw demonetisation happen overnight. If a similar will is exercised by the state and central governments to check the rampant misuse of antibiotics, we could see great change happen soon.

Q: Indian consumers are mostly not aware that meat infected with antibiotic-resistant bacteria could make you sick. Why does this happen? Doesn’t cooking meat at high temperatures, as we do in India, kill all bacteria? Also, your study says that “direct contact with livestock colonized with resistant bacteria is the most documented route of resistance transmission from the agricultural reservoir into human populations”. This means that farm hands are more likely to spread antibiotic-resistant bacterial infections, especially considering that 67% of the workers you interviewed confessed to taking no precautions to protect themselves from poultry shed infections.

For instance, when you eat chicken sourced from poultry raised on growth promoters, you ingest antibiotic-resistant bacteria that were harboured within the chicken. Those bacteria can make you sick. However, those bacteria do not respond to conventionally prescribed antibiotics so your sickness is hard to treat or can even be untreatable. Cooking at a high temperature kills all bacteria but uncooked meat can harbour resistant bacteria. Also, heat cannot break down some of the antibiotic residues that may have remained within the meat.

Also, farm workers’ feet and other body parts are exposed to infected poultry or they breath in the antibiotic-resistant bacteria suspended in the air. Workers can acquire an infection that is not treatable, which they can spread, through direct contact with relatives or through the aerial route.

These and other pathways are all significant. We cannot predict which exposure route will prove to be more dangerous for Indian consumers.

Q: Consumers are bombarded with findings of pesticide residue in vegetables, fruit and milk. This has resulted in a certain resignation - that almost all (if not all) food products carry some toxin or the other, so they have little choice. Would you say that antibiotic-resistant bacteria are a bigger concern than pesticide residue in agricultural produce?

We hear of cyanide being used to artificially ripen farm produce and other pesticides being excessively used. Pesticide residues in vegetables and fruits gradually impact the body. These toxins gradually build up in the body and eventually can make you sick. Antibiotic-resistant bacterial residues in poultry are a problem when the meat is insufficiently cooked and there are food borne infections. Both these issues are serious concerns.

Q: Your study evaluated resistance to 11 antibiotics: ampicillin, ceftriaxone, cefuroxime, chloramphenicol, ciprofloxacin, co-trimoxazole, gentamicin, imipenem, nalidixic acid, nitrofurantoin and tetracycline. What diseases do these antibiotics help treat? Would medicine suffer a setback if these were no longer available?

Modern healthcare, as we know it, would be impossible to practice without antibiotics, and many of these 11 antibiotics play a major role. Most of these are broad-spectrum drugs prescribed for a variety of diseases like respiratory infections, diarrhoea, urinary tract infections, etc. Our study included ciprofloxacin, which belongs to the fluoroquinolone class, and is one of the most widely prescribed antibiotics for people in India. Losing these medicines would be a massive loss to humanity; it could cause many more people to die from common infectious diseases. Consumer awareness can play a major role in preserving these important tools of modern medicine.

Q: You found that poultry farms that produce meat were twice as likely as those that only produce eggs to harbour the ESBL-positive bacteria that is particularly difficult to treat in humans. Also, the prevalence of multiple-drug resistant bacteria in meat farms was 94% as against the 60% in egg farms. And, meat farms were between 2.2 and 23 times more likely than egg farms to harbour Escherichia coli (E. coli), a bacteria that causes diarrhoea and is resistant to multiple antibiotics. This includes ciprofloxacin, used to treat respiratory infections, and nalidixic acid, used for treating urinary tract infections. Is it correct to infer that it is less dangerous to consume eggs than it is to consume poultry (meat)?

From an antibiotic resistance standpoint, it may be safer to eat eggs than to eat poultry. Broilers (animals raised for meat) are fed more antibiotics than layers (hens laying eggs) since the producer’s goal is to increase weight gain over a short period of time. 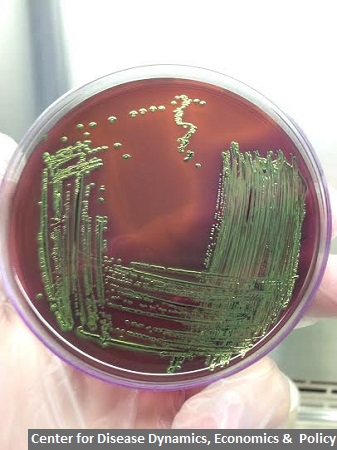 On meat farms as well as egg farms, researchers found Escherichia coli (E. coli)—a bacteria that causes diarrhoea—resistant to multiple antibiotics—such as ciprofloxacin, which is used to treat respiratory infections and nalidixic acid, which is used to treat urinary tract infections. However, meat farms were between 2.2 and 23 times more likely than egg farms to harbour bacteria resistant to multiple antibiotics.

Q: You found that independent farms had a higher risk of E. coli resistant to all the antibiotics tested (apart from nitrofuration) as compared to contracted farms. Why should the farm type impact the risk of antibiotic-resistant bacteria?

Contracted farming operations by large-scale poultry producers rely on small scale farmers to supply the land and labour to raise poultry. Contracted farm managers are obligated to adhere to all instructions, protocols and production processes established by the producer. All their input materials such as the day-old chicks, feed, antimicrobials, etc. are supplied by the contracting firm. It is possible that contract farms are using some good practices, but I must note that the difference between contract and independent farms was not statistically significant.