IndiaSpend Team
Loading...
|5 Oct 2011 6:30 PM GMT
The New Delhi-headquartered, Government-run All India Institute for Medical Sciences (AIIMS) is considered by many as the pride of Indian healthcare and research. An ambitious project to expand these centres of health excellence embarked upon 7 years ago is however running terribly behind schedule, finds SPR's Sourjya Bhowmick after a two-month investigation, which included several Right To Information (RTI) requests filed with Government. In 2004, the Government announced a Rs 2,600 crore ($577 m) outlay for setting up 6 new AIIMs-like institutions with a completion target of 2011. The new AIIMS were to be located in the smaller towns of Patna, Jodhpur, Rishikesh, Bhopal, Bhubaneswar and Raipur. In February 2009, Union Health Minister Ghulam Nabi Azad took the total to 8 by adding 2 more centres to the list, one in Kalyani in West Bengal and Rae Bareli in Uttar Pradesh.Weak Medicine Reports put the outlay for these at Rs 823 crore ($182 m) each, much higher than the original, which was Rs 400 crore ($88 m) per AIIMS hospital. The Delhi AIIMS has 1,766 beds in all with 1,323 doctors and 1,810 nurses. So most of the new ones are smaller versions of the Delhi AIIMS, which have capacity ranging from 900 to 1,000 beds. SPR Foundation established through recently filed Right To Information (RTI) queries that the total amount spent so far on the various AIIMs projects is Rs 923 crore ($205 m). In the context of what has been achieved, it is evident that costs have risen while all hospitals are behind schedule. 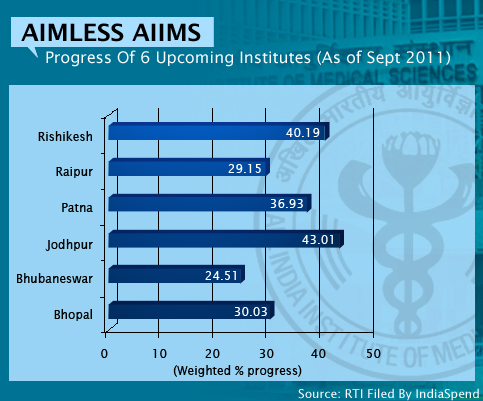