In Vrindavan, A Home for Widows Prepares To Protect Its Elderly From COVID-19

Mathura: When Usha Dasi, 72, found out about the coronavirus outbreak in the second week of March 2020, she stopped attending puja ceremonies at the Radha Raman temple, 1.5 km from her room at the Maa Sharda Ashram in Uttar Pradesh’s Vrindavan. Breaking with her routine of 15 years, she said she now prays in her room.

“We have been told that taking precautions, like washing our hands frequently with soap and keeping our faces covered, will keep this disease away,” Usha Dasi told IndiaSpend. The home where she lives has 100 elderly residents.

Scores of shelter homes dot Vrindavan in Mathura district of Uttar Pradesh, where, for decades, indigent widows have congregated to live and pray--away from families and society that have turned them out, or to seek spiritual solace. There are more than 10,000 such widows in Vrindavan, as per a 2019 report by the NGO Sulabh International, a significantly higher estimate than the previous one of more than 3,000 in 2005, as per a 2009-10 study by the National Commission for Women (NCW).

Most of these women are elderly--the population most at risk of developing a serious illness from COVID-19. COVID-19 would be particularly dangerous if it spreads in an enclosed space where people live in close proximity, such as prisons and orphanages, the World Health Organization has warned. The pandemic has claimed 62 lives and infected at least 2547 in India (as of April 3, 2020 5:30 p.m.).

Maa Sharda Ashram is prepared for this situation, said its caretaker, Rajvir Singh. They have a team of 15, including doctors on-call, a 24-hour ambulance, regular medical check-ups and sessions to make the women aware of the need to frequently wash their hands with soap and wear masks.

Maa Sharda Ashram is maintained by Sulabh International. Vrindavan also has six state-run homes for widows, with about 650 residents, said Santosh Mishra, who is in-charge of these homes.

Widows living here get 20 kg of wheat and 15 kg rice every month, said Mishra. The government’s Indira Gandhi National Widow Pension Scheme provides a pension of Rs 300 per month to below-poverty-line widowed women aged above 40. Those 80 years and older receive Rs 500 a month. The government, in its financial package to alleviate the economic distress caused by the lockdown and to curtail the spread of the disease, has said it would provide Rs 1,000 over a period of three months to widowed women.

All ashrams have stock in abundance and there will be no problem in providing cereal, soap, sanitiser, medicine and masks, Mishra added.

It is important to keep Vridavan’s elderly widows in isolation or home quarantine and make sure they eat nutritious food, said Ved Prakash, a senior doctor with King George Medical University in Lucknow. “Precautions are especially necessary in Vrindavan, as it is a hotspot for tourists, and people from abroad flock the temple city, especially in summers,” he said.

Before the countrywide lockdown that began March 25, 2020, the district administration and government hospitals had formed several teams that conducted health check-ups and held awareness camps in hotels, hospitals, temples and other places where groups gather, Mathura’s chief medical officer, Sher Singh, and the district magistrate, Sarvagyaram Mishra, told IndiaSpend. Streets were sanitised, and people were asked to wear masks.

Inside the homes, they watch the news on TV and keep themselves updated on the dangers of the disease, Mishra, the district magistrate said. There are weekly check-ups and the residents have been provided with soap and sanitiser, and entry of people from outside is banned, he added.

When this reporter visited on March 22, 2020, before the countrywide lockdown, he was asked to first wash his hands with soap, then provided a sanitiser and asked to wear a mask at all times and communicate with the residents from a distance. 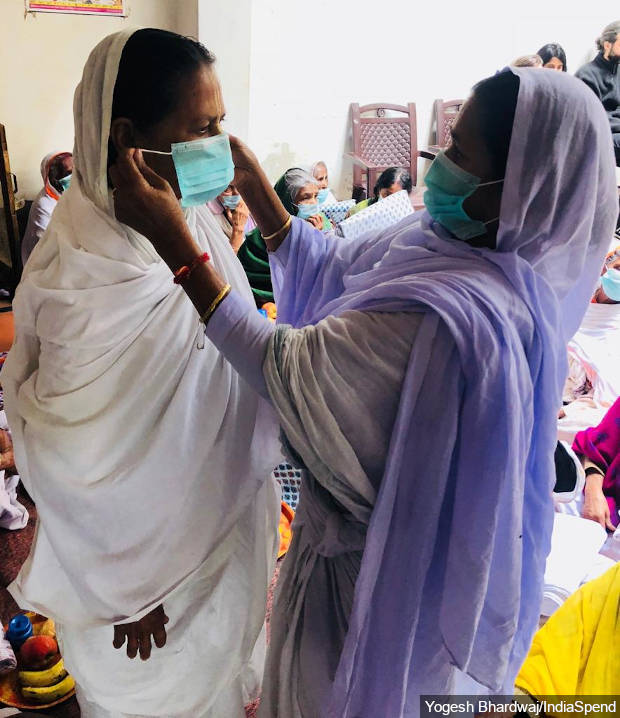 A resident of Maa Sharda Ashram shows another how to wear a mask properly in Vrindavan, Uttar Pradesh, on March 22, 2020.

The numerous temples at Vrindavan, holy to Vaishnavite Hindus, are usually teeming with tourists and local worshippers. All religious places are now closed for the public until at least April 15, 2020.

“We have even asked religious leaders, seers and saints of the city to make an appeal to the public that they do not come to temples or gather in groups,” Singh, the medical officer, told IndiaSpend.

The women at Maa Sharda Ashram and the state-run homes have been asked to not go to the temple or even gather at the home to pray. “Instead they have been asked to pray in their rooms,” said Mishra, who is in-charge of the government homes.

At Maa Sharda Ashram, there is an ambulance round-the-clock. No one has fallen sick so far, said Govind Gupta, a doctor who conducted medical checks at the home. “We have told them [the residents] about the symptoms of this disease and have asked them to report immediately to the hospital if they experience any.”

The World Health Organization has emphasised social distancing and hygiene among the protective measures against COVID19. But Vrindivan’s shelter homes are overcrowded and lack basic infrastructure, as multiple studies have pointed out.

These include the NCW’s 2009-10 study cited above, based on interviews with 216 women living in shelter homes run by the government or NGOs and in rented accommodation. The study had highlighted a lack of adequate physical infrastructure, “mainly running water in bathrooms and toilets” and the unhygienic condition of the toilets in the homes.

Further, overcrowding in the rooms and dormitories was “leading to unhealthy and unhygienic living conditions”, the study said. At Maa Sharda Ashram, each room housed two or three women, we found.

Despite the spirit being “altruistic”, the condition of these homes is “miserable”, a November 2017 review of multiple studies on widows in Vrindavan by the NCW said.

In 2008, the Environment and Consumer Protection Foundation, a charity, filed a writ petition in the Supreme Court to help the widows of Vrindavan “live with dignity”, by requiring the central and Uttar Pradesh governments “to take all steps to rehabilitate them”.

The COVID19 crisis could provide the fillip for such a move in the longer term.

(Bharadwaj and Sharma are freelance writers from 101Reporters.com, a pan-India network of grassroots reporters.)