In A Nation Awash In Eggs, A State Struggles To Get Them To Children

Rukmini Behra, 48, an anganwadi helper in Saradhapur village in Angul, Odisha prepares boiled eggs for three- to -six-year-old children. Eggs are a rich source of protein, vitamin A and B12, and help child growth, but Odisha is one of the few states that provides eggs.

Angul, Odisha: When Rebati Naik, 23, was pregnant she received chatua (a mixture of dry pulses and cereals), ladoos made of almonds, and eight eggs per month as the ‘take-home’ ration under the government’s supplementary nutrition programme, four fewer eggs than she is entitled to. Now her son, Shyam Naik, is nine months old, and she also receives sooji (semolina), as part of the ration.

Eggs are rich sources of digestible protein, vitamin A and B12, important for maternal and child nutrition, and the nutrition program in Odisha provides 12 eggs to pregnant and lactating mothers until the child is six months old. The child receives 12 eggs once but all through her pregnancy and now her lactation, Rebati Naik received four eggs fewer than she is entitled to. These eggs are first shared with her husband, mother-in-law and two brothers-in-law. “I get eight eggs a month, we make a curry and eat it together,'' Naik said. She eats last, depriving herself of an important source of nutrients.

This is especially important in Angul district in Odisha--where 31.8% of children under five years were stunted (short for their age), and 37.4% were anaemic in 2015, data from National Family Health Survey 4 (NFHS 4) show. Across India, pregnant woman, lactating mothers and children need better nutrition--38.4% children across India were stunted, 35.8% underweight, and 58.6% anaemic in 2015-16, NFHS 4 data show. 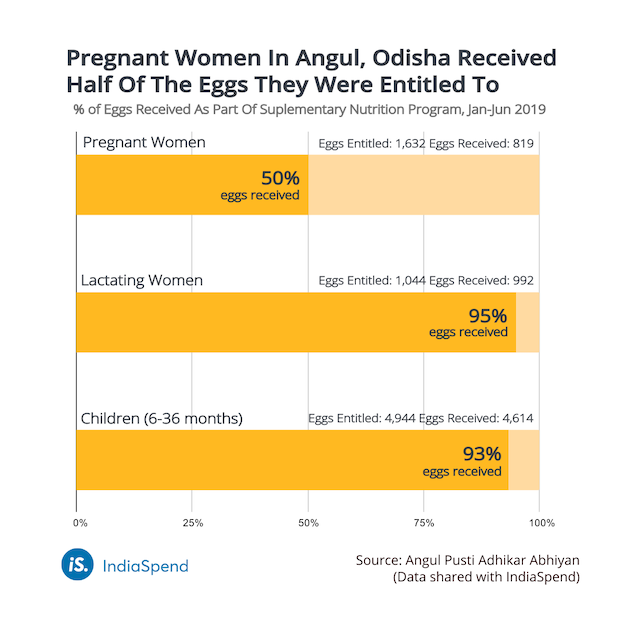 Eggs are a rich source of easily digestible protein such as essential fatty acids, vitamin A and B12, hormones and immunity-increasing substances, readily absorbed and metabolised by the mother’s body. Eating eggs helps increase the nutritive value of breast-milk, helping child growth.

Eggs are relatively easy to obtain, adaptable to many different types of cooking techniques and an affordable source of highly digestible protein, according to a 2018 study on sustainable methods of egg production by Kalpana Beesabathuni, Srujith Lingala and Klaus Kraemer of Sight and Life, a nutrition think tank based in Switzerland.

In most low-income countries, consumption of eggs among women of reproductive age was found to be very low, especially among women from households in the lower wealth quintiles, according to a 2018 study by the International Food Policy Research Institute (IFPRI), a research advocacy based in Washington D.C.

While India is the third-largest producer of eggs in the world, 14.7% of children consumed eggs in a 24‐hour period before the survey, a level much lower than other South Asian countries (25%), the study found. Despite eggs being cheaper in India than other South Asian countries, only 19% of mothers who said they ate eggs, consumed an egg in the 24-hour period before the survey.

Source: 2018, An egg for everyone: Pathways to Universal Access to One of Nature’s Most Nutritious Food, IFPRI

In India, Odisha provides the second highest number of eggs to children

Of the 10 states with the highest proportion of stunted children in India, only three--Bihar, Jharkhand and Karnataka--provide eggs to children as part of the supplementary nutrition programme, as IndiaSpend reported in July 2018. Of all states that provide eggs, Odisha which has the 13th highest proportion of stunted children, provides the second-highest number of eggs to children in anganwadis. 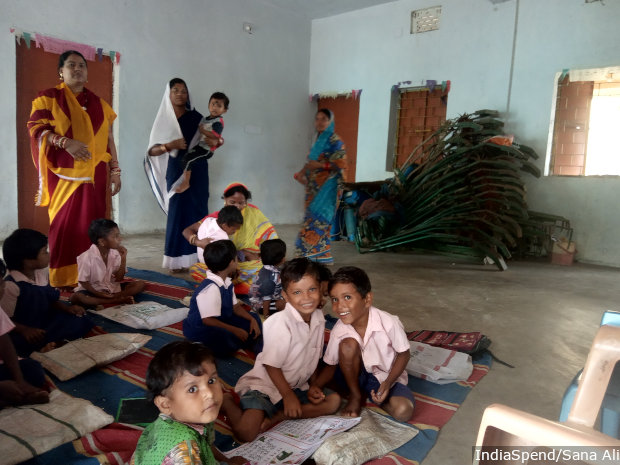 In Nandapur village in Odisha’s Angul district, anganwadi worker Sushma Rao (left) at a make-shift centre, where equipment for the Odisha Livelihood Mission is kept. Only 11 of 22 children enrolled were present in class; the centre is too far for the rest to attend regularly.

Odisha has 34.1% of children under five who are stunted as compared to Uttar Pradesh (UP) with 46.3% of its children stunted. UP does not give eggs as part of the scheme. 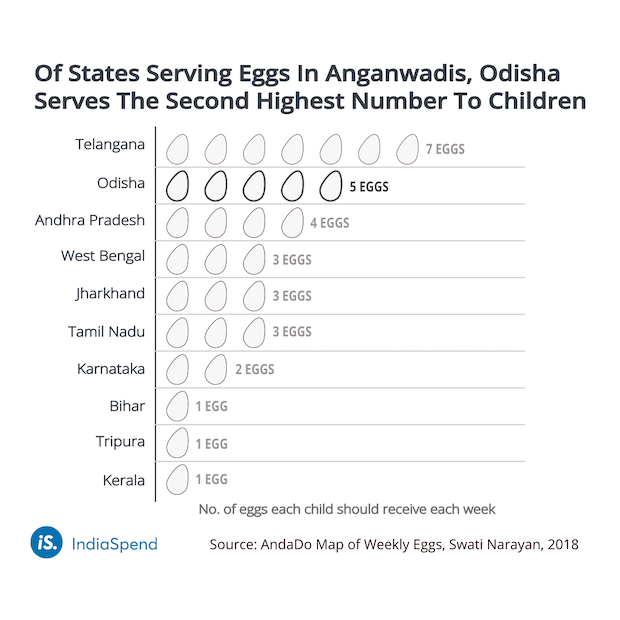 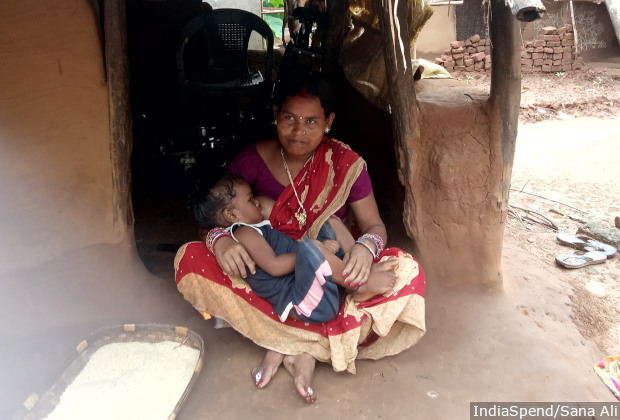 Rebati Naik, 23, of Maanpur village, Angul district, Odisha feeds her nine-month-old baby. Because she lives far from the anganwadi, she did not know where to register for the take-home rations provided by the government. It took her three months to register at the anganwadi.

It took three months for Naik to register herself at the anganwadi centre, and she didn’t receive the take-home ration for these three months. “We do not have an anganwadi in our village, so we did not know where to go,” said Bhishu Naik, 28, Rebati’s husband, and an agricultural labourer. 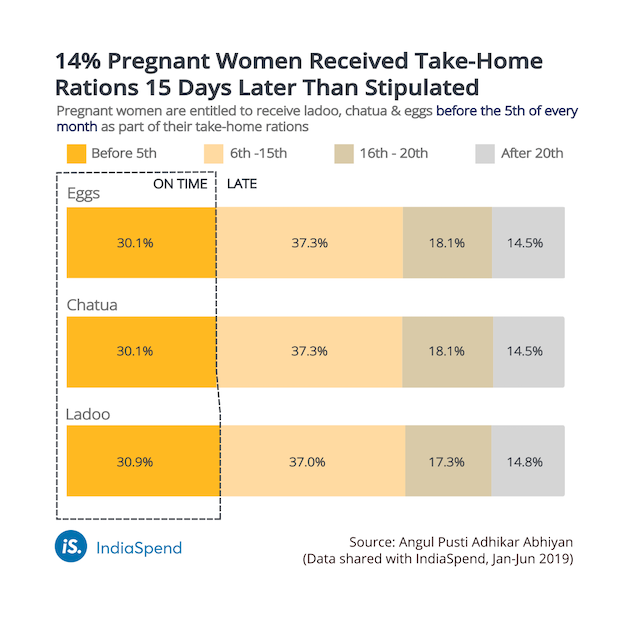 For the take-home rations, eggs are received once a month, through a company that won the government tender.

“We are only given Rs 7.70 per child per day for hot cooked meals,” said Anita Das, 40, an anganwadi worker in Maanpur village of Angul district. “We have to procure eggs from the open market at Rs 5, and sometimes even Rs 6, for the hot cooked meals. We are only left with Rs 2.70 in which we have to manage morning snacks, rice, dal, oil and haldi.

“The number of eggs were increased by the government from eight to 12 in 2018 but the rates have not been increased accordingly. We have to sometimes make adjustments from the take-home ration so that the children who come to the centre do not go hungry,” she said.

In one anganwadi centre in Nandpur in Angul, where three- to six-year-olds shared the area with tools and equipment from Odisha’s livelihood mission, only 11 children attended out of 22 enrolled at the centre. Most of the children not in attendance were from, Namogo, another village; 3 km away, which does not have an anganwadi of its own.

As these children cannot walk alone to reach the centre, they miss out on their hot cooked meal of morning snacks, egg, chattua and semolina. The leftover eggs are given to the children who come to the anganwadi, said Sushma Rao, 42, an anganwadi worker at the centre, but this could not be independently confirmed.

Earlier, this anganwadi operated under a tree or at someone’s house, and now it operates at a panchayat (village committee) meeting hall, Rao said. “We were allotted the panchayat meeting hall after five years, we still don't have a designated anganwadi centre. I have made several attempts to request the sarpanch (village head) to find a solution, but we have been told there is no land available for the anganwadi,” Rao said.

Anita Pradhan, 39, the village head, was oblivious of the situation, and asked us to speak to her husband about the issue. “I have spoken to the child development project officer and we have been told to identify the land for the anganwadi centre ourselves,” said Jayant Pradhan, 44, Anita Pradhan’s husband. “But there is no land left in the village.”

(Ali is a reporter with IndiaSpend.)