Rajvanti Devi, a mother of two girls, was pregnant for the third time, but she did not know how far into her pregnancy she was. This was her first visit to a health centre, and she was surprised when told she was six months pregnant. Further, the pregnancy was risky, the health centre staff told her, because with a haemoglobin level of 8.8 gm/dL, she was mildly anaemic--the normal range is 12-16 gm/dL for women. The risk was greater as her second child had been born through a caesarean section.

Her pregnancy will be tracked through Haryana’s high-risk pregnancy portal--the only one run by a state government, launched in November 2017--to make sure she receives all required antenatal check-ups, supplements, and referrals to specialists in community health centres or district hospitals. Under this system, Gurugram has recorded 2,750 high-risk pregnancies, and Jhajjar district 3,526.

Haryana’s health ministry has set a target to reduce its maternal mortality ratio to 70 per 100,000 births by 2030. The high-risk pregnancy portal helps register and better track high-risk pregnancy cases, to make sure the women never miss a check-up and their progress is monitored closely.

“The goal is to reduce the maternal mortality rate, infant mortality rate and stillbirth because morbidity and mortality is particularly high in high-risk pregnant cases,” said Alka Garg, deputy director for maternal health in the National Health Mission (NHM), Haryana.

Haryana’s experience with its portal would be instructive for all Indian states, which together detected half a million women with high-risk pregnancies under PMSMA between 2016 and 2018. High-risk pregnancies have a greater possibility of complications during labour and delivery, birth defects, premature delivery, stillbirth and, in worst cases, the death of the infant and mother. “Timely detection of risk factors during pregnancy can prevent deaths due to life-threatening complications during childbirth,” PMSMA guidelines note.

As IndiaSpend’s visit to Gurugram district showed, the programme is already showing results. The proportion of high-risk cases identified during antenatal check-ups increased from 6.91% in 2013-14 to 14.35% in 2017-18, data from NHM Haryana show.

Earlier, grassroots health workers would check up on pregnant women but there was no focus on high-risk cases. Now, if a woman with a high-risk pregnancy misses her monthly check-up, it is flagged within the system, and health workers go to her house and bring her to the health centre, said Sheela Devi, 57, a health supervisor at the Wazirabad primary health centre.

The Niti Aayog identified Haryana’s policy for managing high-risk pregnancies, including the portal, as a ‘best practice’ in antenatal care in January 2018.

However, frontline workers, beneficiaries and doctors said the quality of care must be improved, and services made available not only on the ninth but throughout the month.

On being found to be at risk, Rajvanti Devi was given a red card signifying high-risk pregnancy, and will now be closely monitored by grassroots health workers--accredited social health activists (ASHAs) and auxiliary nurse midwives (ANMs)--along with counselling sessions and regular follow-ups until the birth of her child.

The PMSMA is an expansion of the Vande Mataram programme, first launched in the early 2000s. “In the past couple of years there has been an expansion of maternal and outreach health services and more recruitment of ANMs, so things have really improved,” said Sulakshana Nandi, national joint convener of the Jan Swasthya Abhiyan, the Indian branch of the global People’s Health Movement (PHM).

More than 10 million women received antenatal care under PMSMA between July 2016 and January 2018, according to the central Ministry of Health and Family Welfare.

“All government hospitals collate data on the number of high-risk pregnancies in the district, and the portal is updated once every month with all case details,” said Neelam Chaudhari, 44, an ANM in the Islampur health centre of Haryana’s Gurugram district.

“The portal was an innovation of the state to identify high-risk pregnancy cases,” said Garg of the National Health Mission, Haryana. “We have a 100% name-based portal where each woman’s journey through her pregnancy will be closely monitored until the birth of her child.”

Of all the high-risk pregnancy cases recorded in Gurugram, 647 were due to previous caesarean section deliveries, 179 because of severe anaemia, 187 due to hypertension and 211 due to multiple pregnancies, according to the portal.

IndiaSpend obtained district-level data for Gurugram and Jhajjar from the high-risk pregnancy portal. Haryana’s National Health Mission did not share data for the entire state despite repeated emails and phone calls in the month of October. This story will be updated if we receive the data.

A crucial component of PMSMA is counselling of expecting mothers. “We tell them to practice spacing between births,” said Sheela Devi. “If it's a high-risk case or a caesarean, we counsel them to at least have a gap of three years until the next baby.”

“If at any given point they miss their monthly check-up, ASHAs are sent to their homes or we call them to find out why they didnt come,” she added. “The high-risk pregnancy portal is extremely helpful to keep a track record of every woman.”

For delivery or conditions requiring urgent medical attention, high-risk pregnancy cases are referred to district hospitals or community health centres that provide specialist services. “Just last month on PMSMA day, we found a case of hypertension,” said Chaudhari. “A woman had 220/190 mmHg blood pressure, she was immediately sent to the civil hospital along with an ASHA worker.”

Not everyone agrees that the PMSMA is the ideal way to provide antenatal care. Women have to wait in queues, some of them do not get to see a doctor, and the quality of care is poor as there are many women waiting on one single day, said Nandi of the Jan Swasthya Abhiyan.

“This programme is just another campaign,” she added. “The actual high-risk cases are not being prioritised due to herding of all pregnant women on one day of the month to increase footfall... I have seen cases in which the services that should be provided everyday are not being given because the priority is to gather as many women as you can on the 9th of every month.”

When Rajvanti Devi’s high-risk pregnancy was detected, she was recommended to get an ultrasound, and start regular doses of iron and folic acid tablets. During pregnancy, anaemia increases the risk for maternal mortality, preterm birth and infant mortality, as IndiaSpend reported in September 2019.

“I have iron tablets but I do not eat them,” said Rajvanti Devi. “It makes me feel nauseous and I can’t do any of my chores later.”

“Women do not eat the prescribed iron tablets,” said Chandan Kachroo, 58, a gynaecologist in a private hospital in Gurugram, who has volunteered to see patients one day a month under the PMSMA. “I have mostly seen this in patients coming to government hospitals. Patients in the private hospital eat the iron tablets regularly.” 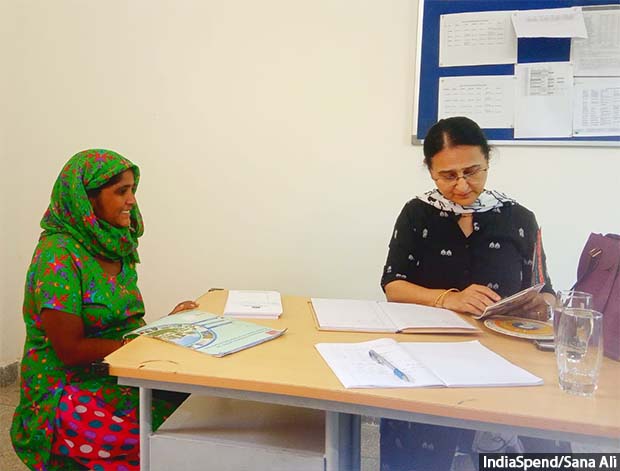 Chandan Kachroo, 58, a private gynaecologist and volunteer under the government’s safe motherhood programme, with Rajvanti Devi, 38. Her pregnancy is high-risk as she is mildly anaemic and had a caesarean section previously. Haryana tracks high-risk pregnancy cases through an online portal, the only state to do so.

Doctors working in the private sector are encouraged to volunteer for PMSMA and provide voluntary services at nearby government health facilities on the ninth of every month. About 5,799 such volunteer doctors have registered to participate under the programme since July 2016, according to a reply in the Lok Sabha (lower house of the parliament).

“There was an appeal made to all the gynaecologists part of the Federation of Obstetric and Gynaecological Societies of India (FOGSI) to participate in PMSMA,” said Kachroo. “I have volunteered for this scheme as a way to give back to the society.”

Kachroo examined a total of 50 patients in the four hours of her volunteering service at the primary health centre in Wazirabad. She said she found 12 cases of high-risk pregnancies.

“Maternal health services being available to every woman is a part of universal health coverage, rather than a charity, which the PMSMA makes it out to be,” said Nandi of the Jan Swasthya Abhiyan. “Remote areas do not have as many private gynaecologists. But most private gynaecologists volunteer in bigger cities where there are already enough practitioners available.”

(Ali is a reporting fellow with IndiaSpend.)