Half of India’s COVID-19 cases in 5 cities

Nearly 45% of COVID-19 cases in India have been reported from five cities--Mumbai, Delhi, Ahmedabad, Indore and Pune.

Mumbai and Delhi, which have the most cases in India, also have the busiest international airports in the country. These airports started screening passengers from China and Hong Kong on January 18.

High population density coupled with poor sanitation facilities in all five cities could be a reason too. 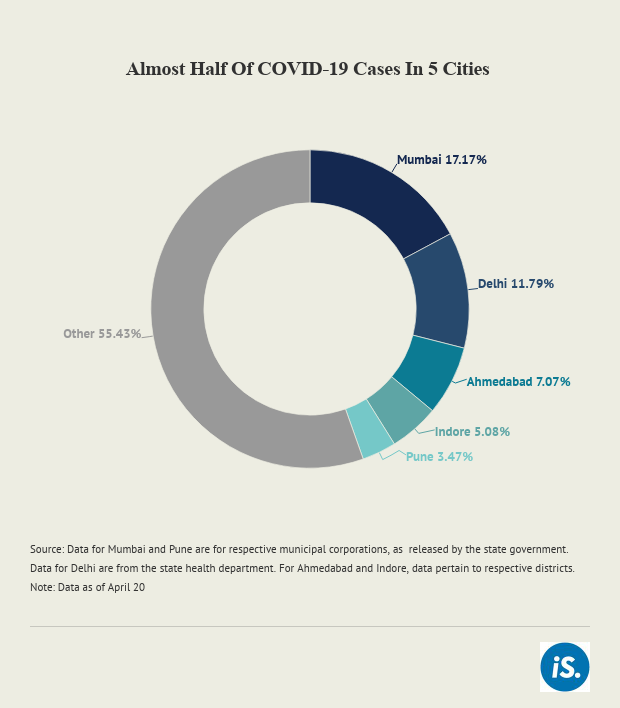 In Maharashtra, which has the highest number of cases, Mumbai and its satellite towns account for 3,607 cases and Pune and its suburban areas for 663. In all, 91.5% of the cases have been detected in these two metropolitan areas.

In Gujarat, 63% of the 2,066 cases were detected in Ahmedabad, which also accounts for close to 38% of the samples tested in the state. Surat (338 cases) and Vadodara (188) are the other two major cities with a high number of cases.

In Madhya Pradesh, more than three-quarters of the COVID-19 cases were reported from two cities--Indore and the capital city of Bhopal. Of the 1,485 cases, 897 are in Indore and 214 in Bhopal.

The home ministry yesterday constituted six inter-ministerial central teams for assessing the situation in states. Two teams each are to be deployed in Maharashtra and West Bengal, and one each in Madhya Pradesh and Rajasthan.

West Bengal has reported only 392 COVID-19 cases as of 8 a.m. today--the 12th highest in the country--but seven of its 23 districts are deemed to be in a “serious” situation.