Four states report 61% of India’s cases, but doubling time varies from 8 to 13 days

Four states that lead India’s case tally--Tamil Nadu, Maharashtra, Gujarat and Delhi--have reported more than 9,000 cases each, accounting for 61% of all cases in the country, according to an analysis of data from HealthCheck’s Coronavirus Monitor.

These rates are based on a three-day moving average of confirmed cases to smoothen out day-to-day fluctuations due to differences in day-to-day testing.

These rates of growth are also reflected in the current doubling time for cases. The average doubling time of cases in India was 12 days between May 1 and May 17, compared to 10.5 days in Maharashtra, 12 days in Delhi, 13 days in Gujarat, and eight days in Tamil Nadu. Even slight variations in the doubling time can drastically affect projections of future cases, as IndiaSpend reported on May 13, 2020.

Kerala, which was the first state in the country with 10 confirmed cases 70 days ago, reported an 18% increase with 90 new cases so far in May 2020.

Reported COVID-19 figures may not reflect the reality. COVID-19 infections may manifest as mild or without symptoms while remaining contagious. Under the Indian Council of Medical Research’s testing strategy, individuals presenting mild or no symptoms are only being tested if they are frontline workers, have a history of international travel in the previous 14 days or have been in direct contact with a confirmed case. It is possible that mildly symptomatic individuals who do not know that they were exposed to the disease are missed out while testing. 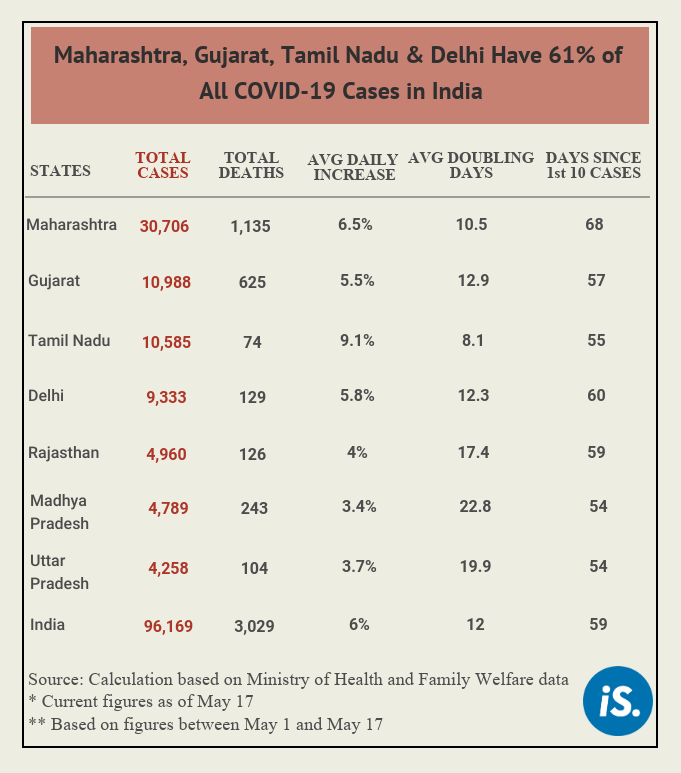 (Bharadwaj, an undergraduate at Yale University, is an intern with IndiaSpend.)