Sabina has recovered from the effects of fluorosis after treatment. Sabina is one of more than 1,000 children in the district who have been crippled by fluorosis over the last six years. (Image courtesy: Dharani Saikia)

Over a thousand children below the age of five have been crippled by fluorosis over the last six years in Hojai in the north-eastern state of Assam. The most pronounced symptoms are bent legs and crooked teeth.

Water contaminated by the chemical flouride, a natural mineral, has been implicated in the poisonings, according to officials from the Assam Public Health Engineering Department (PHED), who first discovered the relationship between the contamination and medical effects in 1999. Fluoride levels in water above the permissible limit of 1 mg/litre have been found in 11 districts in the state--putting an estimated 356,000 people at risk, according to an official survey. Experts warned the numbers would rise if emergency measures were not taken.

“More than a thousand children below the age of five have been crippled because of fluoride contamination” in Hojai district a few years back, according to Najibuddin Ahmed, former additional chief engineer, Assam PHED.

The district’s main town, which goes by the same name, is 170 km southeast of Assam’s largest city, Guwahati. 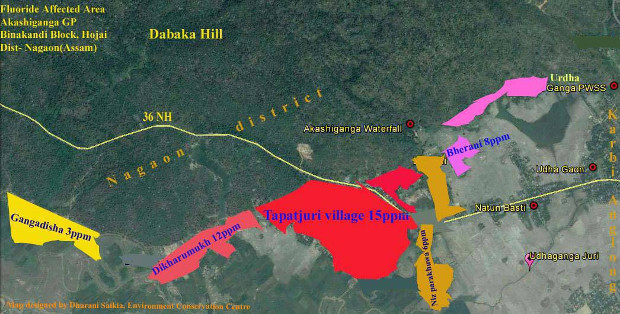 The risk of fluoride contamination has increased in recent years as a result of the increase in groundwater usage--not just in Hojai but elsewhere also in the state.

“If one were to go back in history, people were mostly dependent on surface water resources for their daily needs,” Ahmed said. “Today, only about 15% of the population relies on surface water and 85% use groundwater as the main source. Since the water table has gone down, the concentration of minerals like fluoride has gone up in groundwater, thereby increasing the risk of fluoride contamination.”

“Fluoride is a natural mineral found in water but there are reasons why its concentration has risen,” according to Dharani Saikia, secretary, Environment Conservation Centre, a local non -government organisation that has been working on the issue for more than a decade. “One of them is the change in climatic patterns.”

Long dry spells have led to less rain water seeping into the ground and replenishing the groundwater table. Indiscriminate cutting of trees--for construction purposes and otherwise--has added to the problem. “With ample rainfall, the fluoride concentration in water remains normal but with less rain, the concentration goes up,” Saikia said.

Another major reason, experts said, is the increase in drilling activity for hand pumps and borewell pumps. With the lowering of the water table, the drills are also going deeper, thereby closing in towards the granitic rocks that are rich in minerals such as fluoride. Therefore, fluoride is making inroads into the water pumped up.

“In Guwahati, for instance, earlier they would bore 150-200 feet for water,” Saikia said. “Now, with the mushrooming of flats and housing societies, the water demand has gone up. Since the water table has gone down, they bore up to 250-300 feet.”

Agricultural practices, which use phosphate and sulphate, further contribute to increase in fluoride concentration in water, Saikia added.

A B Paul, former chief engineer, Assam PHED, who is credited with the official detection of both fluoride and arsenic in water in the state, said his discovery was accidental. It was in 1999, during an official visit to Tekelanguin village in Karbi Anglong district--one of the worst-affected districts in the state--that he saw a girl with mottled teeth. “Many other people also showed symptoms of dental and skeletal fluorosis. On investigation, I found the fluoride content in the water varied from 5 to 23 mg/l when the World Health Organization permissible limit is 1 mg/l.”

Arsenic was also detected by Paul, which was followed up with a survey by the PHED and the United Nations Children’s Fund in 2004-05 that found 18 districts at risk.

The level of arsenic is not as high as fluoride, according to Nripen Sarma of Assam PHED. It takes three-four years for its effects to show, and the graveness of the issue is yet to be seen.

An unofficial survey, Saikia said, found that 50,000 children in 285 villages in Hojai district were affected by fluorosis--dental or skeletal. “A total of 485 villages in Nagaon and Hojai are afflicted with fluoride contamination,” he added. 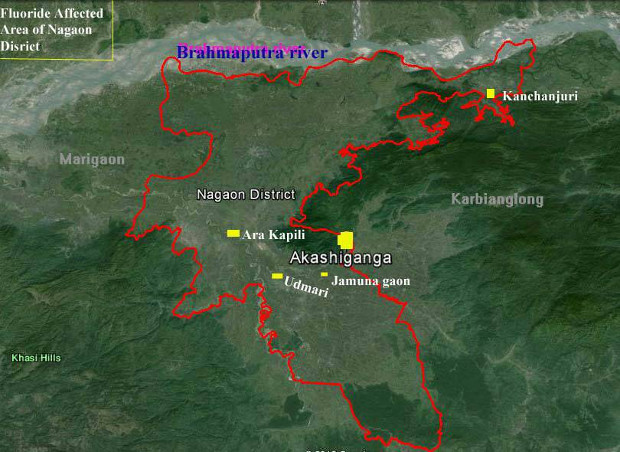 As part of the mitigation efforts, the PHED has marked water sources (such as tubewells) with beyond-permissible limits of fluoride with red colour so that people avoid it for drinking or cooking purposes.

Eleven village panchayats in Nagaon district that were sanctioned funds for tube wells have now been asked to make ring wells.

Saikia has been distributing medicines to treat the disease in Hojai, especially in the Akashiganga gaon panchayat (five villages under this panchayat are fluorosis-affected).

It is a challenge, as the guidelines of the National Programme for Prevention and Control of Fluorosis under the ministry of health and family welfare states that damage or change in skeletal system due to exposure to high levels of fluoride is irreversible.

“Even then, the simple combination of calcium, vitamin D, magnesium and zinc that I have been administering to children below the age of seven has shown positive results,” Saikia said.

“I started with 20 children in 2005; now there are 40--of which five have fully recovered from their symptoms, the bent legs, and the others are on the verge of full recovery.”

People initially did not believe in the medication, Saikia said, thinking it to be witchcraft but were finally convinced when they started getting relief. It takes years of administration of medicines before some of the effects are reversed. 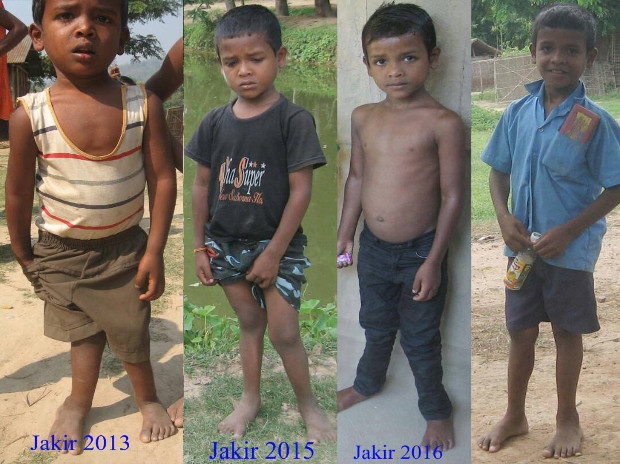 Jakir, who was affected by fluorosis, was photographed over four years. It takes years of administration of medicines before some of the effects of fluorosis are reversed. (Image courtesy: Dharani Saikia)

Even doctors had initially confused the symptoms with polio or rickets, according to Paul, who first started the treatment with vitamin tablets in villages such as Tapatjuri in Hojai. It took him great efforts to convince them and the government.

“The ultimate solution to this problem, I believe, lies in going back to nature,” Saikia said. “We are choking water bodies for construction and agricultural purposes when surface water--after being treated--is the safest for consumption.”

(Rahman is a freelance journalist based in Assam. This story is courtesy thethirdpole.net, a website that tracks Asia’s water crisis.)