IndiaSpend Team
Loading...
|20 Jun 2014 8:14 AM GMT
Here is a number most of you know: more people practice open defecation in India than anywhere in the world – more than 600 million individuals. Moreover, 60% of households in rural India do not have access to toilets in the house. Over 99% rural households in Odisha don’t have toilet facilities at home. In states like Uttar Pradesh – which witnessed the dastardly rape and murder of two girls in when they had to step out of their homes at night since there were no toilets at home - 65% of rural households still don’t have toilets at home. These shocking numbers are extracted from the Baseline Survey 2012 of the Ministry of Drinking Water & Sanitation: Large states like Bihar, Madhya Pradesh and Rajasthan also have a huge, huge gap in providing for toilet facilities at home. India’s President Pranab Mukherjee, while addressing members of the Parliament on the first day of the new Lok Sabha session, said that by the time the country completes 75 years of Independence, every family will have a pucca house with water connection, toilet facilities, 24x7 electricity supply and access. Well, that would be around 2022. He also said: “We must not tolerate the indignity of homes without toilets and public spaces littered with garbage. For ensuring hygiene, waste management and sanitation across the nation, a “Swachh Bharat Mission” will be launched. This will be our tribute to Mahatma Gandhi on his 150th birth anniversary to be celebrated in the year 2019.” Where do the efforts to achieve all this stand ? The 12th Plan has envisaged spending Rs 37,159 crore to ensure total sanitation (toilet access) across the length and breadth of the country, and make India open defecation-free nation. 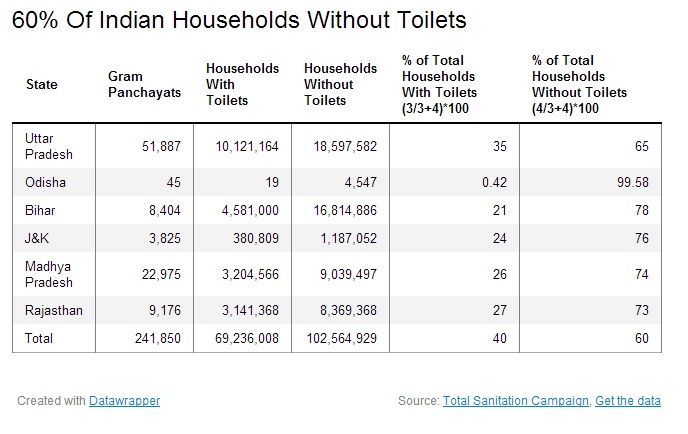 The central Government has spent over Rs 12,568 crore since financial year 1999-2000 on the sanitation programme. The central Government has been increasing the spend on sanitation regularly. From Rs 46 crore in the year 1999-2000, spending hit a peak of Rs 2,438 in the year 2012-13 and declined marginally to Rs 1,952 during the last financial year (2013-14). Uttar Pradesh (over Rs 2,000 crore), Madhya Pradesh (Rs 1,625 crore) and Bihar (Rs 1,131 crore) received the maximum contribution from the central Governments for the programme but the implementation, as seen from the earlier data set on individual household facilities, leaves a lot to be desired. So, where lies the problem? Efficient utilization of funds in a non-corrupt way would obviously be one. But here is an interesting view from Sangita Vyas, associate director of sanitation at RICE, an organisation focused on research and policy advocacy around issues affecting child and maternal health in India: “So many people in rural India are satisfied about defecating in the open, the new Prime Minister will only meet his goal if he can create a social movement that changes people's attitudes, and builds demand for toilet use….what India needs is a concerted effort to change the attitudes and behaviours of its citizens to get them out of the fields and into the simple but sanitary toilets they can already afford.” IndiaSpend had earlier reported from rural Uttar Pradesh how the ambitious scheme is floundering because of slow execution and a flawed understanding of social dynamics. (Read: Government Gives Money For Toilets, They Build Kitchens).
governmet households Lok Sabha Murder open defecation rape rural