New Delhi: The “pharmacy to the world” is besieged by problems, a new report says. Central and state governments have inadequate numbers of drug inspectors, no records or databases of errant drug manufacturers, and an overall lack of capacity that leaves them incapable of enforcing recalls and uneven punishing violators. Poor communication between state and central drug regulatory bodies compounds the problem.

The report, ‘Drug Regulation in India: The Working and Performance of CDSCO and SDRAs’, is based on primary research unearthed through three Right to Information (RTI) applications, and minutes of meetings, circulars and documents available on government websites. Lawyers Shree Agnihotri and Sumathi Chandrashekaran compiled the findings of the nine-month effort and published their report on the website of the non-profit Thakur Foundation in October 2019.

Drugs manufactured in the country find buyers across the world. India ranks third in volume and tenth in value in pharmaceutical sales in the world, according to a report by the Indian Pharmaceutical Alliance and global consultancy firm McKinsey.

This growth has been punctuated by concerns over the quality of drugs manufactured in India. Of the 38 notices that the United States Food and Drug Administration (USFDA) issued this year until August, 13 were sent to Indian pharmaceutical companies. These notices were about quality, active pharmaceutical ingredient contamination, data management and cleanliness, Down To Earth reported in August 2019.

This problem has also been highlighted at home. The Bureau of Pharma Public Sector Undertakings of India (BPPI) found that 25 batches of drugs from 18 pharmaceutical companies supplying low-cost generic drugs under the Pradhan Mantri Bhartiya Janaushadhi Pariyojana (PMBJP) since January 2018 were of substandard quality, as The Hindu Business Line reported in June 2019. PMBJP is the government’s scheme to provide drugs at low cost through its outlets.

The lawyers’ research highlights the factors that led to some of these problems. Agnihotri and Chandrashekaran found that there was weak enforcement of law so that the number of prosecutions against offenders was low. A senior regulatory official, who did not want to be named, countered this by saying that India has among the toughest legislation that allows for life imprisonment if a drug is found to be spurious. “No other country allows this kind of punishment,” he said. “We are doing enough to ensure effective regulation of drugs.”

Strong legislation does not translate into ability to enforce the law. The regulation of manufacture, sale and distribution of drugs is primarily the state authorities’ responsibility under the provisions of the Drugs and Cosmetics Act, 1940. The Drugs Controller General of India (DCGI) at the Centre looks after licenses, ensures quality of drugs, approves new drugs and regulates clinical trials. The DCGI works under the Central Drugs Standard Control Organization (CDSCO) and is advised by the Drug Technical Advisory Board (DTAB) and the Drug Consultative Committee (DCC).

Healthcheck sought an interview with the DCGI, and emailed questions to the CDSCO, in October 2019. There has been no response yet.

The State Drug Regulatory Authorities (SDRAs) are tasked with drug regulation and work under the health department of the respective state. Drug inspectors are the foot soldiers ultimately responsible for executing the policy and regulatory framework governing drug manufacturers.

There ought to be one drug inspector for every 50 manufacturing units and one per 200 distribution retailers, according to a formula set out by the Malshekar committee, which made recommendations for improved drug regulation.

The number of drug inspectors in most states was inadequate, the report found. For instance, there were half the number of recommended drug inspectors in Gujarat and one-third the recommended number in Maharashtra and Punjab. In the erstwhile state of Jammu & Kashmir, 13 of 84 (15%) sanctioned posts remained vacant. Himachal Pradesh reported a vacancy in six of 22 (27%) posts, Karnataka in 15 of 28 (53%) and Tripura in six of 23 (26%). 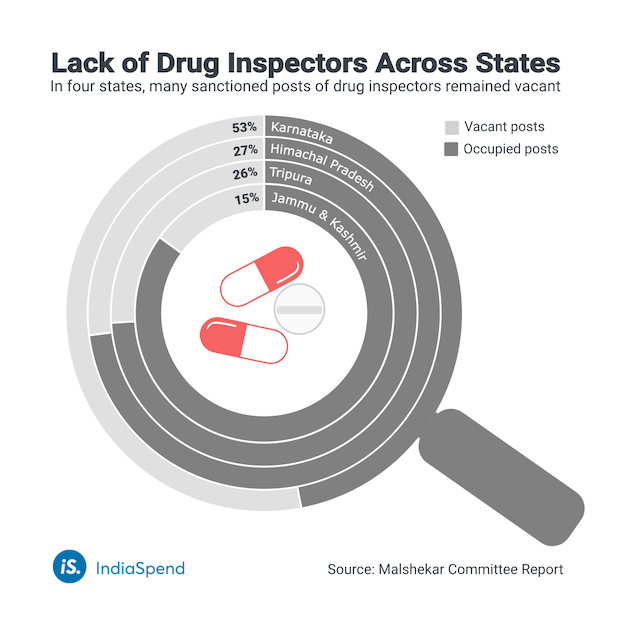 The Central regulatory body too does not have sufficient number of drug inspectors. Of the 287 positions in the CDSCO, 64 were vacant (22%), the report noted.

There is no time limit under which drug inspectors working under SDRAs are expected to complete their inspections, the report found. Once a drug or brand is found to be substandard, all remaining stocks have to be withdrawn as per provisions in the Drugs & Cosmetics Act, 1940, said Chandra M Gulhati, who edits the Monthly Index of Medical Specialities, a drug-prescribing reference guide. The CDSCO has the authority to announce a drug recall. But it is rarely effective since detection often takes place months after a drug is released in the market.

“By the time a notification is issued, most stocks have already been sold,” said Gulhati on email. “Stocks in the retail chain are often not withdrawn due to lax implementation. Inadequate field inspectors, aided and abetted by corruption, add to the problem.”

Besides, the CDSCO does not have the capacity to enforce an actual ban, the report noted: “Currently, there is no system to ensure implementation of a recall order.” A July 2018 proposal sought the allocation of a dedicated Assistant Drug Controller for implementation to ensure recall of defective drugs and another for creating intelligence cells at the state level.

This lack of capacity can lead to deflection of responsibility as was recently the case with a heartburn medication called ranitidine. On September 13, 2019, the USFDA announced that preliminary tests in ranitidine had found a small presence of a contaminant, N-nitrosodimethyalamine (NDMA), which is linked to cancer.

After the announcement, the USFDA and the European Medicines Agency said they are studying the safety profile of the drug even as Canadian and French regulators asked for the drug to be removed from the market.

In India, V G Somani, who heads the DCGI, put the onus on the drug manufacturers to ensure patients’ safety. In a directive to drug controllers of all states and union territories in the last week of September, the DCGI asked the drug manufacturers of ranitidine active pharmaceutical ingredients to “verify their products and take appropriate measures to ensure patient safety”.

There is no regulation requiring anti-counterfeiting measures for sale of drugs in the country, said Nakul Pasricha, who leads the Authentication Solutions Providers’ Association, a non-profit that represents the anti-counterfeiting solutions industry globally. A 2018 DTAB recommendation to the top 300 Indian pharmaceutical brands to incorporate an anti-counterfeiting solution--application of a unique code to each consumer-level pack with SMS-based authentication code--was watered down by making it voluntary, he said, adding, “Since it is voluntary, the adoption is not as high as expected.”

The drug inspector has the power to term a drug as ‘spurious’ or ‘not-of-standard’ quality--the former involves criminal intent. It is then up to the state drug regulatory authority to launch a prosecution, issue a recall order or revoke a company’s license, if it fails to comply.

The penalty for non-compliance is at the discretion of the drug regulatory authority. In some cases, the same punishment has been meted for drugs that were ‘not-of-standard’ quality and for those that were ‘spurious’, the report noted.

In addition, neither the inspectors, nor the SDRAs are required to maintain a record or repository of information about non-compliant, errant and offending drug manufacturers, the report noted. There was also no record or database of departmental action against a manufacturer or a retailer.

The lack of records means that cases of non-compliance seldom lead to prosecutions, the authors said. Lack of data also made it difficult to identify repeat-offenders, as the RTI responses showed. In the four years from April 2015 to January 2019, Mizoram reported four prosecutions (2.8%) for 141 instances of failed compliance, Odisha reported six (0.6%) for 876 instances and Jharkhand reported seven (0.4%) for 1,723 instances.

Source: Drug Regulation in India: The Working and Performance of CDSCO and SDRAs report, 2019

If there were a database of offending pharmaceutical companies, they could face stricter penalties when prosecuted. Instead, offenders, especially repeat-offenders, are able to escape punishment.

The little-to-no information-sharing between the Centre and the states, and among the states, leads to an ‘information asymmetry’, the report noted. “The information that the central authority possesses neither appears to be adequately shared with nor communicated to the authorities at the state level who are expected to execute policy,” the report noted. “This impacts the volume and quality of prosecution, and has a resultant adverse effect on the state of the pharmaceutical industry as a whole.”

As a result of the lack of information-sharing, a risk-based regulatory framework--where several factors such as previous compliance, product risk and type of manufacturing site are considered, and facilities with high risk are inspected on priority--becomes impossible to enforce in India, said Chandrashekharan.

This is why the communication network between the Centre and the states becomes extremely critical. “Not only must the communication be clear, responsibilities and accountability frameworks also need to be clarified and enforced,” said Chandrashekaran. “There appears to be considerable scope for this.”

The problem with India’s drug regulation system is not about inadequate human resources or information sharing but simply about implementing the law, said Mahesh Zagade, a former head of Maharashtra’s Food and Drug Administration (FDA). As FDA commissioner, it was Zagade who acted against Johnson & Johnson’s faulty hip implant in 2011. “There is a sense of complacency in implementing the law and some SDRAs may even be corrupt.”