New Delhi: A 65-year-old man in Mumbai was taking ayurvedic remedies for weeks prior to testing positive for COVID-19. Even when his symptoms worsened and he had trouble breathing, he was reluctant to go to a hospital. He died of COVID-19 in September.

“Essentially, he had trust in traditional ayurvedic medicine and did not trust the system of modern medicine. He said that modern medicine would not be as effective and private hospitals would be expensive,” said his niece, Rutuja Havaldar, explaining her uncle’s decision. Havaldar said that her uncle followed the advice of a family member who presents videos propagating AYUSH for COVID-19 on Marathi TV channels.

In April, when Charles, the prince of Wales, recovered from COVID-19, Union minister of state for AYUSH (ayurveda, yoga and naturopathy, unani, siddha and homeopathy), Sripad Naik, claimed that the former had used ayurvedic medicine. The British royal’s office issued a statement refuting the claim. A few months later, Naik himself contracted COVID-19 as did Union home minister Amit Shah. Both turned to modern medicine: Shah was first admitted to Medanta Hospital in Gurugram and then to the All India Institute of Medical Sciences, New Delhi, while Naik was in the care of doctors at Manipal Hospital in Goa.

Yet, the AYUSH ministry in October released recommendations to integrate “Ayurveda and Yoga interventions” into India’s national clinical management protocol for COVID-19. Among other things, it recommends tackling COVID-19 with warm water gargles, applying medicated ghee in nostrils, steam inhalation, drinking “golden milk” (hot milk with turmeric) and kadha/kashayam/kwath (hot infusion with ayurvedic herbs) combined with good diet, sleep and exercise. The clinical protocol recommends patients take ayurvedic formulations such as Ayush-64, Guduchi Ghana Vati, Guduchi with Pipalli and Asvagandha even while suffering from hypoxia (loss of oxygen in the body) and breathlessness due to COVID-19. India had recorded 8.2 million cases and over 122,000 deaths by November 2.

The Ministry of Health and Family Welfare already has a clinical protocol for COVID-19 based on modern medicine and science and the document has been updated multiple times to add or drop new medicines and therapies whenever new evidence has come in. The new AYUSH ministry recommendations -- based on little scientific evidence and some in contradiction with the current clinical protocol -- have lent legitimacy to home remedies and added to confusion over COVID-19.

These AYUSH recommendations have upset some doctors and made frontline workers’ jobs more difficult, we found. Doctors we spoke to narrated instances of COVID-19 patients reporting late to hospitals as they were relying on ayurvedic home remedies instead. Doctors said they noticed low platelet counts and excessive bleeding during surgeries among their patients as a result of unmonitored use of herbal remedies.

How robust is the evidence for the AYUSH protocol for COVID-19?

One glaring discrepancy between the government’s allopathic and AYUSH protocols was on treating COVID-19 symptoms: The government’s modern medicine clinical management protocol say that moderate COVID-19 symptoms include hypoxia (loss of blood-oxygen) and breathlessness, and such patients should immediately get medical attention and remain at a dedicated COVID-19 centre, not at home. However, the AYUSH protocol suggests that hypoxia and breathlessness pertain to mild COVID-19, and as such, could be treated by consuming herbs mixed in water. 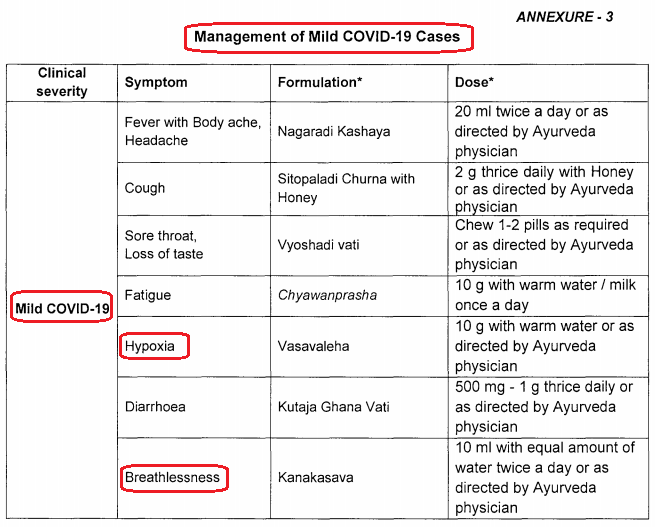 Source: National Clinical Management Protocol based on Ayurveda and Yoga for management of Covid-19

IndiaSpend also studied the 253 citations referenced in the AYUSH recommendations and found deficiencies in the studies cited. For example, the committee cited a 1981 article about a clinical trial for Ayush-64’s efficacy on malaria, which is not available online. AltNews found a copy of this paper, which apparently claimed that patients on AYUSH64 showed an “80% response with the drug”, without specifying what this means. However, newer research by government agencies found this drug to not be effective against malaria and this was not considered by AYUSH ministry in this recent protocol. This research, for example, published in2000, found that Ayush-64 showed only 50% efficacy compared to chloroquine, after which the researchers discontinued further research.

Many of the 253 citations were not related to studies conducted for COVID-19 at all but for breast cancer, HIV, diabetes, malaria--diseases with pathologies very different from SARS-CoV-2, the virus that causes COVID-19. Yet the AYUSH protocol has made extrapolations from these diseases, to COVID-19.

Many of these studies had not been carried out on humans yet; they were very nascent pre-clinical research involving just mice or chicks. Still others had not even reached the animal testing phase and were merely carried out on computer software. Yet, these studies made definitive conclusions about the usefulness of these herbs to manage COVID-19. The document also repeatedly referred to “trends”, but from incomplete and unpublished studies. 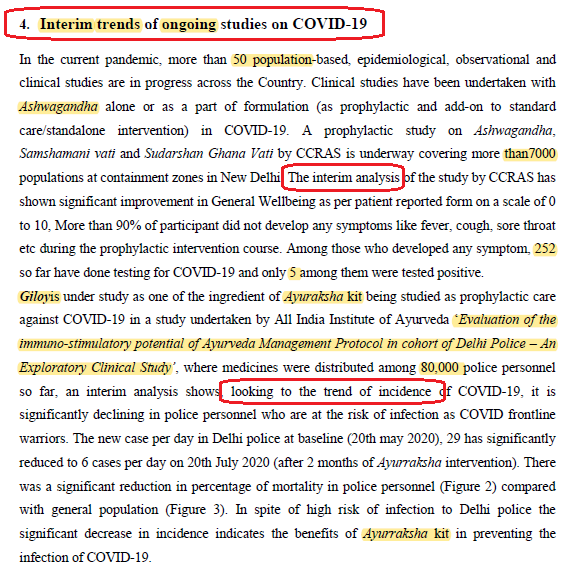 Source: Report and recommendations of the Interdisciplinary Committee for integration of Ayurveda and Yoga Interventions in the 'National Clinical Management Protocol: COVID-19'

Some citations were from the 1960s, which researchers said was too old to cite as evidence in a clinical protocol for a newly-emerged disease. Several citations had been repeated, many were incomplete and some URLs mentioned opened to pages where no paper had been uploaded. Many of the articles cited were opinion pieces, commentaries and reviews of literature. Some of the articles cited were written by people who were on the same government committee that had recommended the AYUSH treatments, and hence not entirely independent in their assessments.

IndiaSpend emailed questions to the Ministry of AYUSH and also contacted its office-holders by phone about the evidence cited in their protocol. Both the email and phone calls went unanswered. We will update this story when they reply.

For example, the AYUSH recommendation had cited references to show the adverse effects, contraindications and limitations of modern medicine for COVID-19 but had not cited any articles to show its positive indications, he said. “Likewise, the document has only cited articles that show positive effects of AYUSH formulations without considering any valid literature which shows its benefits as well as harms or which is critical of the same,” he said.

“There is not a single study, cited in the AYUSH ministry document, that was done on human beings to test efficacy of AYUSH drugs on COVID-19,” said Philips.

Public sold on AYUSH, doctors have it hard

The new AYUSH protocol had upset India’s largest body of modern medicine doctors, the Indian Medical Association (IMA). In a letter to the government in October, the IMA asked: How many ministers in the Indian government have chosen AYUSH treatment for COVID-19? Further, the IMA challenged the government and asked it to hand over India’s entire COVID-19 care to the AYUSH ministry if its proposals were truly scientific and effective.

Doctors treating COVID-19 have had the challenges stacked against them right from the beginning (as IndiaSpend reported here and here on staff shortages, lack of equipment and other problems). Apart from the few scientifically proven options available to them, they also have to contend with pseudoscience.

Raghuraj Hegde, an ophthalmic plastic surgeon in Bengaluru, was performing a surgery in September and the patient suffered excessive and unexplained bleeding. “The patient had done a range of tests before the surgery and there was no reason for him to have had so much bleeding. He was not on any blood thinners either. We couldn’t explain the situation,” said Hegde.

Hegde struggled but safely concluded the surgery. Afterwards, Hegde found out that the patient had been taking a herbal concoction of ginger, garlic, turmeric and asafoetida thrice daily to ward off COVID-19. Studies document that commonplace ingredients such as garlic, ginger and turmeric when consumed in certain quantities can affect platelet function and blood coagulation.

“The surgery I performed was an elective surgery and is not generally one where there could be heavy bleeding. So, we did not have blood on stand-by,” said Hegde. Had he known beforehand that the patient was taking herbal remedies that could cause blood-thinning, Hegde said, he would have delayed the surgery and asked the patient to stop the home remedies for a few days first. But this would not be an option in case of emergency surgeries or pregnancies.

“Often when we ask patients before surgery if they are on any medication, it does not occur to them to tell us they are eating raw ginger, raw turmeric or drinking kashayam,” he said. “They see this as a ‘herbal home remedy', not as a chemical or medicine. I think it is time that we doctors ask patients directly if they are taking any herbal or ayurvedic medicines before any surgery to eliminate the risk of things like excessive bleeding… more so because of people’s anxiety over the pandemic and them taking herbal medicines to prevent COVID-19,” said Hegde, adding that his department at Manipal Hospital, Bengaluru, had now asked surgeons to make this a part of pre-surgery protocol.

Philips, the Kerala-based hepatologist, had also consulted patients with various ailments, who had been taking AYUSH formulations to keep away COVID-19. The Kerala government was distributing some homoeopathic medicines as a preventive for COVID-19 and Philips tested some of them in a government approved lab.

“The lab results showed that these so-called medicines were anything from placebos to potentially harmful,” said Philips, the Kerala-based hepatologist, who has published a number of scientific articles on the impacts of AYUSH drugs on the body. “One sample of homeopathic pills had nothing in it, not even sugar. Another sample had arsenic and other industrial solvents such as palmitate. The biopsy of one of my patients showed drug-induced liver injury, which they probably suffered after consuming these homeopathic medicines.” This points to the clear risk involved in taking these medicines and moreover, their supply is not highly regulated and they are often consumed without a physician’s supervision, added Philips.

Ten months into the pandemic, drug after drug promoted as potential treatment for COVID-19 has fallen through. In the last few weeks, major trials have shown that none of the currently prescribed drugs and interventions--remdesivir, lopinavir/ritonavir, hydroxychloroquine, interferon β1, plasma therapy--are successful at treating COVID-19.

And on this very basis, the AYUSH system of medicine has thrown a challenge to modern medicine. In the government’s report, the expert committee that recommended the AYUSH protocol made exactly this argument.

While this is true, where things are different is that modern science has put various drug candidates through hundreds of clinical trials all over the world and, that too, on large sample sizes, as IndiaSpend reported. In the 10 months of this pandemic, their results have been peer-reviewed and hundreds of papers have been published in journals, becoming take-off points for further research. Clinical trials have also been conducted on humans and some are in advanced phases. And in this process of rigorous testing, many of the initial drug candidates for COVID-19, have, in fact, been junked.

“However, in case of the AYUSH ministry-recommended drugs, the trials were facing difficulties in enrolling volunteers as patients were being courted by several trials at the same time,” said Sanjeev Sharma, director of National Institute of Ayurveda, Rajasthan. “We have not published any new studies on ayurvedic drugs for COVID-19 so far,” he confirmed, adding, “Many studies are being completed and the papers will be published soon.”

(Bhuyan is a special correspondent at IndiaSpend.)

Anoo Bhuyan reports on healthcare at IndiaSpend. She has also reported on issues of law and justice, technology and society and gender. Before IndiaSpend, she worked at The Wire, Outlook Magazine, BBC News and National Public Radio. In 2018, she won Bournemouth University’s ‘Journalist of Change’ award for her reporting on extra judicial killings in Manipur. She also received a scholarship for her postgraduate degree at the School of Oriental and African Studies, University of London. She can be reached on Twitter at www.twitter.com/AnooBhu.