38% Of Indian Children Under 4--Poor And Rich Alike--Are Stunted: Study

Mumbai: Over one-fifth (22%) of children belonging to India’s richest households are short for their age (or stunted as per the World Health Organization), according to the State of the World’s Children (SOWC) report released by UNICEF on October 15, 2019. Children from poorer households are worse off: Over half (51%) are stunted. Overall, 38% of the children below four years of age are stunted.

Stunting is caused by malnutrition and both rich and poor children in India are eating badly for different reasons, said experts. “Awareness about healthy diets is low in India, even among the economically well-off segment,” said Shweta Khandelwal, additional professor and head of nutrition research at the Public Health Foundation of India.

India also has the world’s third worst (after Djibouti and South Sudan) wasting rate: 21% of its children are underweight for their height, according to the SOWC report.

Low weight and height in early childhood are a consequence of undernutrition, and their effects may be irreversible: Children who eat insufficient food lacking in the required nutrients fall sick more often and earn less as adults, effectively keeping them trapped in poverty.

Poor nutrition in early life leads to stunting and loss of IQ, which has consequences for the economy, said Mumbai-based pediatrician Rupal Dalal, adjunct professor at the Centre for Technology Alternatives for Rural Areas at Indian Institute of Technology, Bombay, and director of health at the Shrimati Malati Dahanukar Trust.

Stunting and impaired brain development are common among those who received inadequate food in the first 1,000 days of their life, said Khandelwal. “The adverse effects are difficult to reverse,” she added.

Early childhood malnutrition increases the risk of developing non-communicable diseases such as hypertension, diabetes and heart disease in adult life, the experts concurred. In addition, stunted mothers face complications during pregnancy and this affects their children as well.

Children who were stunted in the first two years of their life go on to spend less time in school and earn up to $1,440 (equivalent to Rs 1 lakh) less over their life than their peers of average height, said the SOWC report.

Poor children do not get enough protein: Study

Children under the age of two, breastfed or not, also do not get required nourishment irrespective of household income. Only 6.4% of children in this age group had enough intake of essential nutrients, found the CNNS.

Consumption of proteins was low among children from the poorer states in the eastern and central parts of India, the study found.

“Poor diets like one having inadequate quantity and quality of carbohydrates and proteins are adversely associated with child’s growth and development and may result in stunting and/or wasting,” said Khandelwal. “Failure to provide key nutrients during the first 1,000 days, a critical period of brain development, may result in lifelong irreversible deficits in brain function.”

Growing children require nutrient-dense foods, especially proteins from eggs, milk, beans, nuts and seeds, fish and meat, and good fats, Dalal said. “Lack of protein, good fats and micronutrient-dense foods which are replaced by empty calories will cause growth failure, frequent infections, lack of concentration in school, tiredness and so on,” she said.

Around 55% of children aged 6-23 months who were surveyed consumed no fruit or vegetable, according to the SOWC report. But almost all children, across age groups, consumed cereals and (starch-rich) tubers such as potatoes, according to the CNNS.

Traditionally, Indian diets were rich in nutrient-rich foods such as millets and pulses. However, in a bid to ensure food security, the Indian government enacted policies that led to farmers favouring rice and wheat over fruits, vegetables and livestock products, according to Transforming Food Systems for a Rising India, a 2019 book by Cornell University researcher Prabhu Pingali.

The result is that fruits and vegetables are too expensive for many families: Only 25.4% of the poorest children aged 2-4 years ate fruits and 54% vegetables, according to the CNNS.

Children from the relatively richer households did slightly better--56.7% of the richest children ate fruits and 61% vegetables. But the low numbers indicate that nutritious food is not consumed even by children whose parents can afford it.

“Most studies say that children may be considered to have adequately diversified dietary intake if they had food items from at least four of the seven food groups,” said Khandelwal. The seven food groups, as per the WHO’s infant and young child feeding practices guidelines, are grains, roots, and tubers, legumes and nuts, dairy products, flesh foods, eggs, vitamin A rich fruits and vegetables and “other fruits and vegetables”. 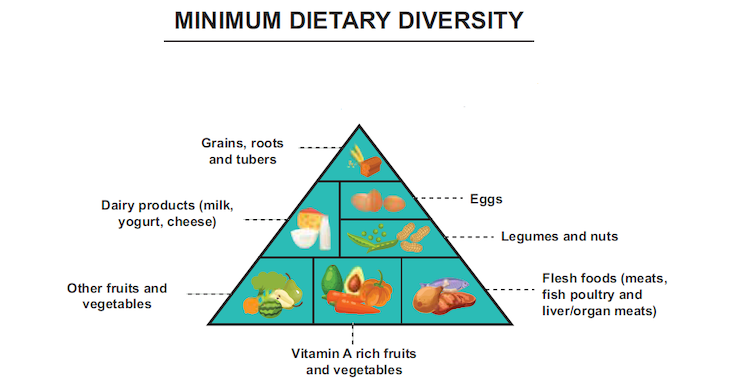 “Lack of (food) diversity is a serious threat gradually pushing us towards hidden hunger,” said Khandelwal. “Several micronutrients, vitamins and minerals have vanished from our diets because we have substantially cut down variety in our daily meals. Most households, due to time and resource (money, education, access, availability) paucity, are moving away from traditional local recipes, vegetables and fruits to a quicker, more accessible market version of takeaway or home-delivered meals.”

It is important to emphasise balanced healthy diets with micro- and macronutrients as a public health policy, she added.

As many as 38% of Indian children below four years of age, as we said, are stunted--including those belonging to the richest households. Obesity is less prevalent--2% of all children of that age are overweight or obese, according to the SOWC report. Over 40% of children aged 1-4 years are anaemic, as per the CNNS.

In addition to being stunted, children from the richest households--who can afford iron-rich vegetables, fruits and meat--also reported being anaemic. Over one-third (34.2%) of such children and just under half (46%) of the poorest children reported some form of anaemia.

This simultaneous existence of anaemia, obesity and stunting/wasting is what nutrition experts call the “triple burden of malnutrition”.

Inadequate protein and good fats in mother’s diet is also a reason for stunting, according to Dalal. A significant reason for faltering growth in the first few months of a child’s life is the lack of awareness about right breastfeeding techniques, said Dalal. Ignorance about how an infant should latch on correctly to the lower areola exists not just among mothers but also doctors, nurses and healthcare workers.

Breastfed children’s diets do not contain enough proteins and other growth micronutrients. “It is also important to include vegetables and fruits and (a) variety of whole grains like bajra, sorghum, millets and so on,” said Dalal. “They (the children) should not be exposed to junk foods like biscuits, wafers, street foods like batata-vada, bhajiya, (nutritional supplements like) Pediasure, Horlicks, high sugar/jaggery foods, sugary drinks and cakes and pastries.”

The WHO recommends that the child be introduced to solid and semi-solid foods--called complementary foods--at six months, as breast milk is no longer sufficient to meet the needs of the growing body, the CNNS report noted. However, the complementary foods fed to most children lack proteins and other micronutrients, said Dalal. “They are monotonous and watery and do not contain seeds, nuts, legumes and animal proteins,” she said.

“Many issues around income, education, gender, women empowerment, poverty, social inclusion/welfare schemes, sanitation etc are related and known to have an impact on nutritional status of the masses,” she added. “All these have to be addressed under a smooth harmonised multi-sectoral strategy guided by effective leadership to have a sustained impact.”

Khandelwal emphasised the need for multidisciplinary strategies. “Right now, most programmes and policies are a bunch of single-focus top-down initiatives with no conversations between the multiple sectors who should be talking and assuming collective responsibility to advance science and translate those into public health policy/action,” she said.

A plan for improving diagnostic and tertiary care, providing trained staff and enhancing the capacity to deal with issues related to malnutrition are necessary, Khandelwal pointed out. “Let us not associate nutrition with merely how much and what to eat but all other related behaviours to have a meaningful impact on public health and nutrition,” she added

(Iqbal is an intern with IndiaSpend.)