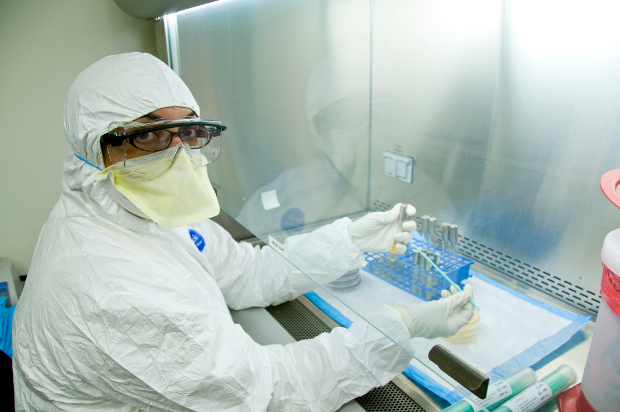 Faced with a growing food- and water-contamination crisis, India has only 148 food-testing laboratories. In other words, each laboratory serves 8.8 million people. In China, each laboratory serves 0.2 million people. By the end of 2013, China had 5,790 accredited laboratories. Maharashtra has the most laboratories, 27, a laboratory for every 4.2 million people. Uttar Pradesh has the least, seven, a laboratory for every 28 million people. Adulterated food and contaminated water affect the health of millions of Indians, often crippling and killing them. Unsafe food and water, containing harmful bacteria, parasites, viruses and chemical substances are responsible for nearly 200 diseases, across India and the world. On world health day, April 7, the slogan--"From farm to plate, make food safe"-- and the theme, food safety, appear particularly relevant to India. India is the worst in the world when it comes to deaths from diarrhoea with 11 of every 100 children under the age of five dying from the affliction. Among the BRICS (Brazil, Russia, India, China, South Africa) nations, South Africa is next with a diarrhoea death rate of 7%. China, the world's most populous country, has a 4% diarrhoea death rate. Diarrhoea - Deaths among children under the 5 Source: World Health Statistics 2014; Figures in % Milk is India's most commonly adulterated food, as IndiaSpend previously reported, with 68.4% of milk samples adulterated, as per the standards of the Food Safety Standards Authority of India. In 2013-14, of 72,200 food samples, including milk/milk products, edible vegetable oils, spices, pulses, vegetables, regulatory officials found 13,571 samples adulterated and wrongly branded. IndiaSpend also reported that about 46 million people across 78,508 rural habitations in India use water contaminated with arsenic and fluoride--both cause serious health problems. Organised by the World Health Organisation (WHO), the aim of world health day is to spur governments to improve food safety through public-awareness campaigns and encourage consumers to ensure the food on their plate is safe by asking questions, checking labels and following hygiene tips. Diarrhoea, an intestinal tract infection that weakens the body, killed 5,305 Indians between 2011 and September 2014, with 40 million cases registered. Another consequence of contaminated food and water is enteric fever or typhoid, a bacterial disease, caused by Salmonella typhi, transmitted by food or drink contaminated by the faeces or urine of infected people. Typhoid claimed 1,401 lives across India between 2011 and September 2014, with 5 million cases registered. State-wise deaths from acute diarrhoeal diseases Source: Lok Sabha; Figures for 2013 and 2014 are provisional, *2014 figures up to September State-wise deaths caused due to enteric fever (typhoid) Source: Lok Sabha; Figures for 2013 and 2014 are provisional, *2014 figures up to September Globally, about 2 million people die every year from contaminated food or potable water, according to the WHO, and nearly 1.7 billion cases of diarrhoeal disease are reported every year. Diarrhoea is also the second-largest killer of children globally, accounting for 9% of all deaths among children below the age of five. In 2013, an estimated 580,000 children--or nearly 1,600 every day--died of diarrhoeal infections. (Chaitanya Mallapur is an analyst with IndiaSpend.) Image Credit: Wikimedia The headline and article has been revised to reflect the correct number of people per lab in India. __________________________________________________________________________ “Liked this story? Indiaspend.com is a non-profit, and we depend on readers like you to drive our public-interest journalism efforts. Donate Rs 500; Rs 1,000, Rs 2,000.”