1 In 2 Indian Diabetics Unaware Of Their Condition: Study

Bengaluru: About one in every two Indians (47%) living with diabetes is unaware of their condition, and only about a quarter (24%) manage to bring it under control, a May 2019 study has found. Rural men with low household wealth and low education levels had a higher incidence compared to other groups.

The study, titled ‘Variation in health system performance for managing diabetes among states in India: a cross-sectional study of individuals aged 15 to 49 years’, and conducted by the Public Health Foundation of India (PHFI), the Madras Diabetes Research Foundation (MDRF), Chennai, and the Harvard School of Public Health with other international organisations, used secondary data from the National Family Health Survey, 2015-16, for the analysis. It included 647,451 women and 101,668 men between the age group of 15 and 49 years, and has balanced male and female participation using statistical methods and survey design analysis.

"In developing countries like India we need to shift focus from maternal and child health to the rising burden of non-communicable diseases,” said Ashish Awasthi, assistant professor at PHFI and a co-author of the study, which was published in the medical journal BMC Medicine. “Like developed countries, we also need to have regular health check-ups to monitor our blood-glucose levels. Here, we undergo a check-up only when we are joining a new organisation and they ask for a health certificate."

As of 2017, India had 72.9 million diabetes patients--second only to China (114.3 million), according to the International Diabetes Federation’s Diabetes Atlas 2017. India may overtake its neighbour in the next five years to become the diabetes capital of the world, said Viswanathan Mohan, Chief of Diabetology at Dr. Mohan’s Diabetes Specialities Centre and a co-author of the study. This is in line with the estimation by the International Diabetes Federation that India will have 134.3 million living with diabetes by 2045.

“A third of these diabetes cases develop into a kidney ailment, which require either a transplant or dialysis,” Mohan said. “Imagine at least 30-40 million people suffering from it. We do not have enough donors for transplant, and dialysis costs at least Rs 3 lakh per year, a cost that most people cannot afford in our country.”

Rural men with lower education levels and household wealth were associated with higher prevalence, the study found. Women performed better, possibly due to routine screening for gestational diabetes during antenatal care for women. 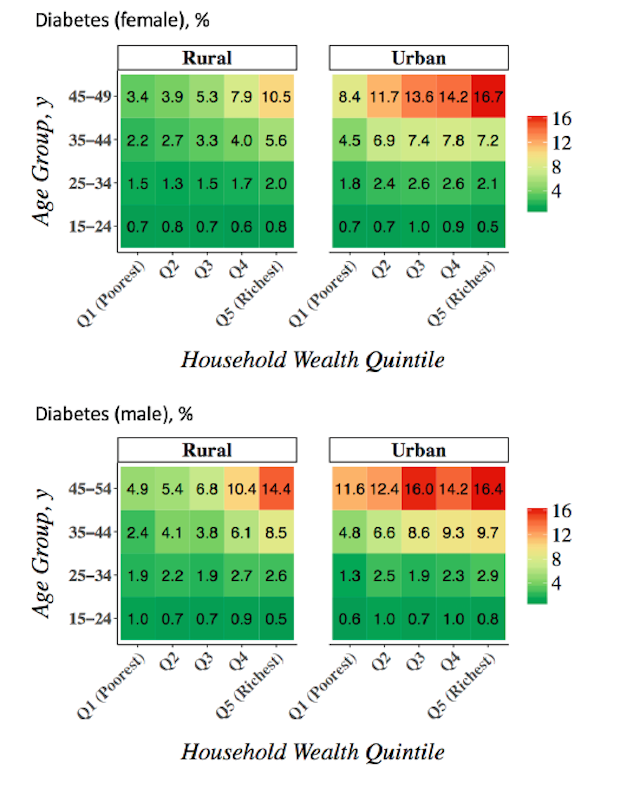 This trend for the rural poor raises concerns as they have the lowest access to high-quality care for the complications resulting from diabetes and are also most likely to foot heavy medical bills for them, the study said. Since many of these individuals are subsistence farmers they also rely on their physical health to earn their livelihood.

Out-of-pocket (OOP) health expenses drove 55 million Indians--more than the population of South Korea, Spain or Kenya--into poverty in 2011-12, as IndiaSpend reported on July 19, 2018.

47% patients “lost to care”, many due to lack of follow up

The study analysed the prevalence of diabetes in India through the “cascade of care” model: Patients with chronic conditions transition across a number of care steps--screening, diagnosis, treatment--before they can achieve successful control of the condition. This approach helps establish the steps at which patients are lost to management of their disease in a health system.

As the figure below shows, 47% patients are lost at the awareness level, a further 11% at the treatment level, and another 17% fail to achieve control despite having sought care.

“If 47% are not aware about their diabetes, then for every known case of diabetes there is at least one unknown,” Mohan said, adding, “This is a silent disease so people do not know they are suffering from it.”

Some patients do not seek treatment even when diagnosed with diabetes, Mohan said, attributing it to clinical inertia, which he studied for a November 2018 editorial in the Journal of Diabetology.

“Clinical inertia is the failure of healthcare providers to initiate or intensify therapy when indicated,” Mohan said. “The patients also suffer from it. Sometimes a patient may have high sugar levels and we may suggest them to start taking insulin. They give excuses like a wedding in the family that led to consumption of too much sweets. They ask for a few months to bring down the levels but will not turn up for at least a year by when it is too late.

WhatsApp forwards spreading fake news is also a factor contributing to this as they tend to mislead patients, Mohan said.

Mohan said it could be due to the higher gross state domestic product of the southern states. “Their food has more calories, carbohydrates and sugar. They can afford cars and scooters. They eat more but exercise less,” he said.

Kerala has the highest awareness of the condition--that is, seven in 10 patients were aware of their condition. Yet, it ranked third nationwide in diabetes prevalence, after Goa and Andaman and Nicobar Islands.

“Sudden transition in eating and exercise habits have caused it,” Thiruvananthapuram-based diabetologist Jothydev Kesavadev said. “There is not even a rural-urban divide in Kerala due to strong Middle East influence on many poor who work in Dubai or other Gulf countries. All ‘poor’ consume foods loaded with red meat and carbohydrates.”

However, almost half of the patients who are aware were unable to bring their diabetes under control--which, according to Kesavadev, is a result of patients seeking alternative medicines and approaching modern medicine only after complications arise.

“Despite 100% literacy in the state, there is a deep-rooted belief in traditional systems of medicine and unproven therapies,” he said. “Even the [state] government promotes unproven Ayurvedic therapies for diabetes management. People believe modern medicines have side effects and others don’t.”

In neighbouring Tamil Nadu, 2.2 million people were living with diabetes, the study found, leading to a 6.8% prevalence.

“There is a high intake of polished rice which has less fiber content,” S Nallaperumal, diabetologist at Prashanth Hospital in Chennai, said. “This is absorbed faster leading to faster insulin secretion and at a high level. Over a period of time, this leads to the pancreas becoming weaker. Moreover there is westernisation of food with more intake of maida."

States with low prevalence tend to have poor care indicators, the study found. For example, Mizoram has 3% prevalence of diabetes, but only 40% patients in the state were aware of their condition, 30% sought treatment and 12.6% had their levels under control.

In many of these states, often less wealthy, health systems largely focus on communicable diseases and maternal and child health--as opposed to lifestyle diseases such as diabetes--the study said.

Meghalaya had the highest percentage of patients who sought care (61.4%), the study found.

Meghalaya also had the highest percentage (53.8%) of patients with blood sugar levels in control.

The pollution link--and other causes

Exposure to fine particulate matter (PM 2.5) was the third leading risk factor for Type 2 diabetes deaths in 2017, after high blood sugar and excessive body weight, according to the State of Global Air 2019 report.

Higher incidence of diabetes among south Indians could also be due to a genetic factor, Nallaperumal said. “Studies have shown that south Indians living in the UK also have a higher blood sugar level, so it could be due to the genes. This part of the world faced a long duration of food shortage so our genes have transformed for low food resources. But now we are consuming much more.”

Large-scale screening programmes to improve the detection of diabetes are needed to combat the disease, the study said. The five-year UDAY programme--an initiative by Project HOPE which provides training to healthcare providers and community health workers to prevent and manage diabetes and hypertension--in Andhra Pradesh and Haryana improved screening, and consequently awareness, the study said.

Another concern is whether India’s healthcare system will be able to effectively cope with the increase in demand for diabetes care.

For instance, in Uttar Pradesh with a population of 200 million, there are only 17 government medical colleges and one tertiary care referral centre, Awasthi said. “Even for diagnosis and treatment, the hospitals are far and scattered across the region. If the awareness increases, the benefits will be limited if the people have to stand in long queues for availing treatment. The infrastructure needs to be provided for better treatment and bringing it under control.”

In West Bengal, where diabetes prevalence was 4.2%, higher/lower than the national average, medical facilities are concentrated in district headquarters and in the capital, Supriya Datta, consultant physician and diabetologist at Dr. Mohan’s Clinic in Kolkata, said. “That limits people’s access. We need to have more centres in the peripheries and with good doctors. Right now, we see many doctors leaving these areas as the administration is not good.”

(Chacko, a postgraduate in journalism, is assistant professor of journalism at Mount Carmel College, Bengaluru, and an IndiaSpend intern.)